You are here: Home / Blog / De Soto National Memorial
This post may contain affiliate links or mention our own products, please check out our disclosure policy here. 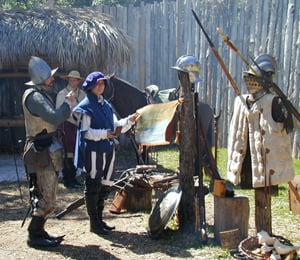 In 1539, when Hernando de Soto first discovered the area around what is now the city of Bradenton, Florida, he brought along enough supplies to start a colony. In fact, the Spanish conquistador arrived with nine heavily laden ships, 600 soldiers, over 200 horses, a herd of pigs, and packs of vicious war dogs! It was everything he needed to carry out King Charles V’s command to “conquer, populate and pacify” while searching for gold.

If you’re heading to the Sunshine State this winter and are unfamiliar with de Soto’s expedition and its controversial impact on Floridian history, the best place to get a quick and entertaining education is at De Soto National Memorial.  Situated along the calm shores of the Manatee River and Tampa Bay, this free waterfront park includes a visitor center, outdoor encampment, picnic area, and hiking trails.

Inside the Visitor Center, a short informative film narrates how de Soto and his soldiers spent four years (December 1539 to September 1543) trekking across 4,000 miles of what is now the Southeastern United States in search of gold and other riches. The men often marched 12 miles a day wearing 80 pounds of armor!

Outdoor Camp Ucita, a replica of de Soto’s base camp, vividly brings to life stories of hostile conflicts between conquistadors and local inhabitants. The Living History presentations, including firing demonstrations of the crossbow and the arquebus (a black powder weapon) by costumed park rangers and volunteers, runs through April each year.

Hernando de Soto’s 4-year expedition did not yield the gold and treasures he and his men so desperately sought, nor did a Spanish colony take hold as originally intended (which explains why the city of Bradenton wasn’t founded until the 1850s and was named for Joseph Braden, who grew sugar cane and operated a sugar mill). Instead, native peoples were enslaved, villages pillaged, and by 1543, de Soto and half his men were dead. The few remaining soldiers abandoned the quest and headed to Mexico.

Hopefully you’ll pack much lighter when you visit this area of Florida than de Soto did. Don’t skimp on the sunscreen, but definitely leave your vicious war dog locked inside your RV!