You are here: Home / RV Basics / How To Avoid Deadly Natural Hazards In Your RV
This post may contain affiliate links or mention our own products, please check out our disclosure policy here.

For people who enjoy boondocking away from it all, a lot can go into the decision on where to set up your rig.  Where is the ideal view?  Is the site flat? Where is the closest fishing hole?  But many people don’t think about the overall safety of their chosen campsite until it is too late.

As a family with both a wildland firefighter/emergency responder and a background in geologic hazards, we often spend HOURS finding a spot that we are reasonably sure won’t kill us in our sleep.  Here are some helpful tips to keep in mind. 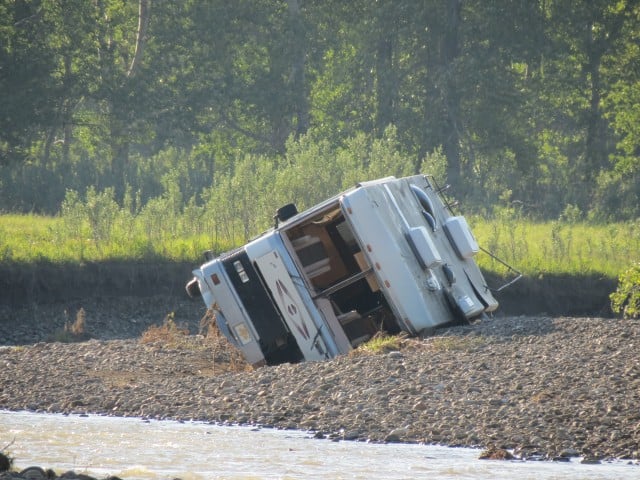 An unfortunate RV that was caught in flood waters and deposited downstream in a sandbar. (Photo from irv2.com member Chris Big Doer)

Fires can start from natural causes, such as a lightning strike, or more often from human causes.  They often create their own winds that can push a fire front along at high speeds. Spot fires from airborne embers can ignite and quickly surround your site in flames.  Know basic fire behavior (generally travels uphill and downwind) and keep that in mind when choosing a location.

Before you head out, check on the wildfire conditions and restrictions for the area where you will be camping.  You can check on active fires in the area on InciWeb.  Select a camping spot that has minimal vegetation and no overhanging tree branches, and clear away dead flammable debris.

Be watchful for signs of fire (smoke, orange glow, visible flames).  For an interesting book about the Glenwood Springs, Colorado Storm King wildfire, check out “Fire On the Mountain” by John MacLean.

The flash flood that killed ten people in Arizona highlights how dangerous and unpredictable rainstorms can become, even far away from your location, particularly if an area has been previously burned.

Often, people want to camp on flatter surfaces that can be found at the mouths of canyons where seemingly innocent creeks trickle by, but those flat surfaces were put there from past flood events. 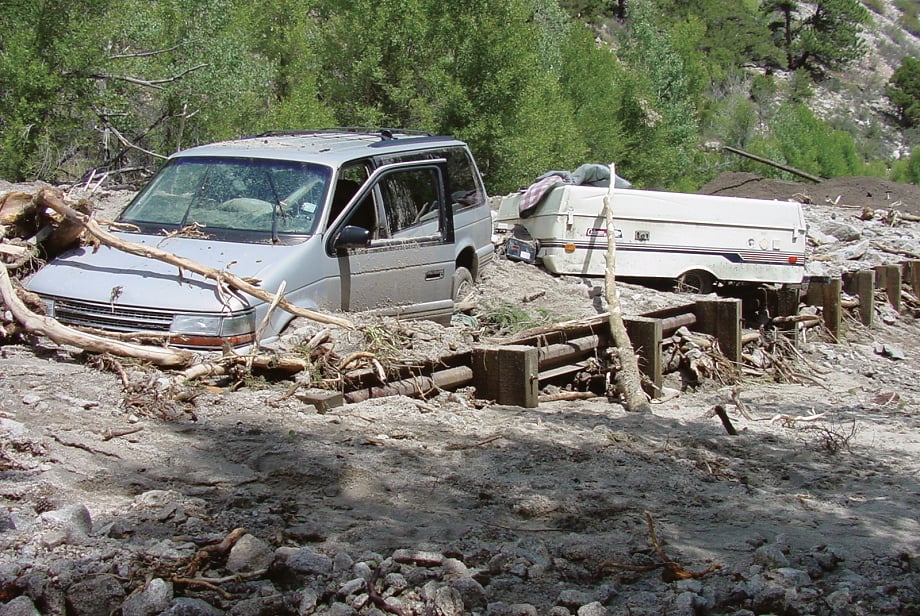 This traveler was caught by a fast-moving debris flow from a side canyon along the road they were driving. (Photo courtesy of the Colorado Geological Survey)

Upstream rains draining to narrow channels can quickly gain a lot of energy.  That energy picks up rocks, mud, trees, and debris along the way, sending a thick slurry of deadly material rushing downstream.

If the floodwaters don’t get you, the debris being carried in them certainly can.  Avoid camping in drainages (even dry ones), at the mouths of canyons, or in low areas where water may accumulate; and be very aware of the weather upstream from your location.

If you notice that the site you want to camp at has a bunch of large boulders lying around, look up!  Is there a cliff or an outcropping of rock above you?

Chances are that those boulders laying around fell (or rolled) there from somewhere.  Avoid camping under cliffs, exposed rock faces, or talus slopes.  Keep in mind that rocks can bounce and roll down a slope quite a distance. 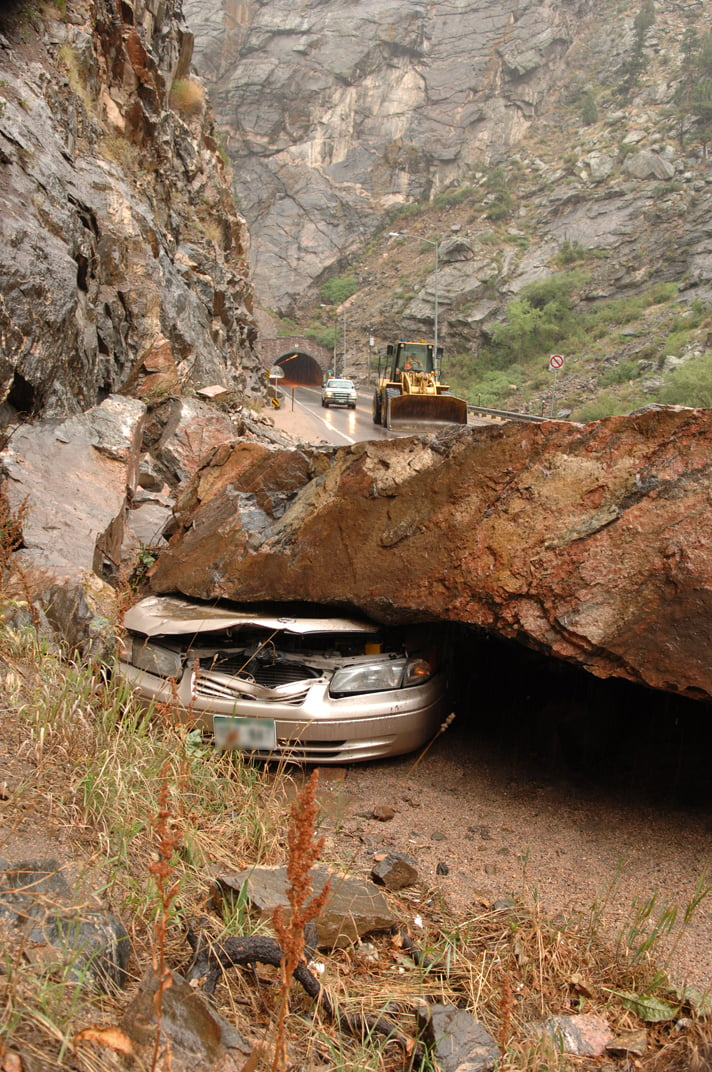 A vehicle parked along the shoulder of Highway 6 in Clear Creek Canyon, CO became a steel pancake after a slab of rock fell on it. Fortunately, the occupant was fishing when this happened. (Photo courtesy of the Colorado Geological Survey)

In the US, lightning strikes are second only to floods for weather-related deaths, killing on average 40-50 people each year.  Be on the lookout for lightning when storms begin to build, even if there is no rainfall.  Lightning can strike 10 miles away from the thunderhead.  The safest place to be during a storm is inside a hard-topped vehicle.

To best hedge your bets against a lightning strike, choose a campsite that is not below a solitary tree, in a wide-open area, or exposed on a ridge or elevated surface.  Stay out of pit toilets and open-topped vehicles as they offer no protection from a strike.  Wait a good 30 minutes after the storm before heading back outside.

Any time you are boondocking, know how to get out quickly if you need to evacuate.  Have at least two drivable routes in mind in the event that one is blocked or impassable.

Park in such a way that you can leave your campsite quickly if needed.  Some families practice RV fire drills or emergency situations so everyone knows what to do and where to go before an emergency happens.  Planning ahead of time can make your stay more relaxing when you arrive.