You are here: Home / Great RVing Destinations / Adventure Is Endless On Alaska’s Denali Highway
This post may contain affiliate links or mention our own products, please check out our disclosure policy here.

It was late December, and the daily transition from day to night unfolded around us as our dog teams marched along the snowy roadway.  Puffs of frosty breath rose amid the pastel sunset and monochromatic colors of the arctic landscape.

We wouldn’t see other human beings for the next several hours as we covered the distance to the Alpine Creek Lodge, where our teams would rest and a warm meal would be waiting for our arrival.  This perfect snowy world was ours, with only the sounds of dog paws crunching on the snow, and the soft breathing of our furry companions to mark the rhythm of the trek.

The dogs, sensing the adventure at hand, seemed to be enjoying the landscape and the stark beauty of the dramatic mountains as much as we were.  We were joined by the spirits of those who had traveled this route a hundred or thousand years ago, and the ravens watched our progress. 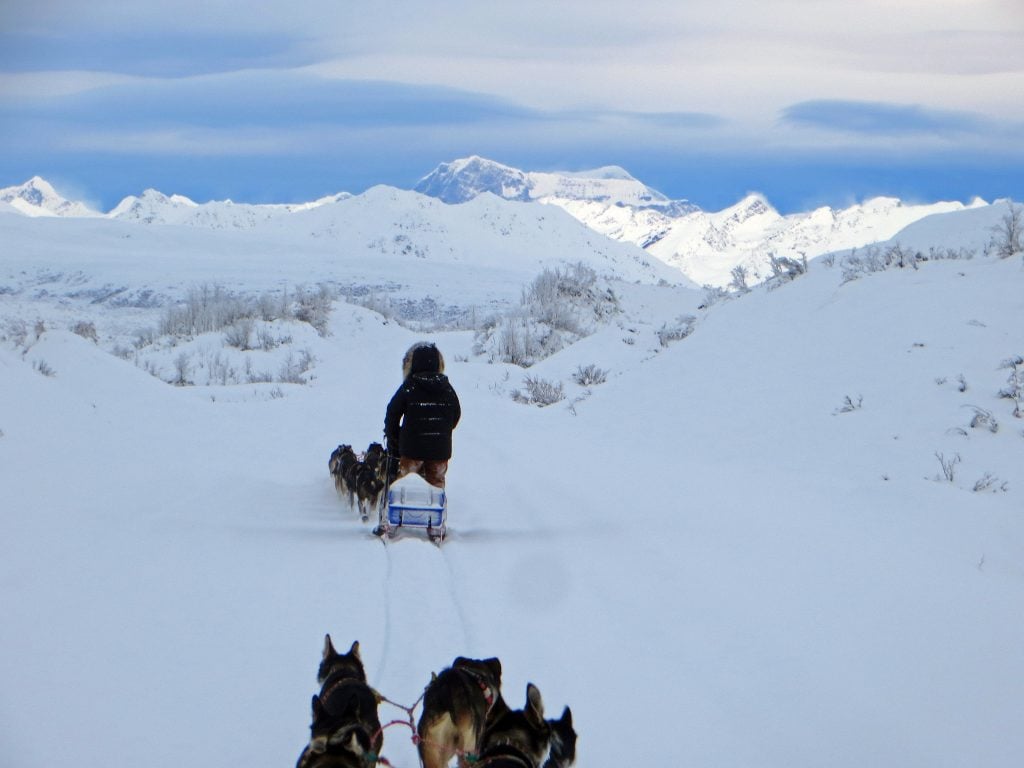 Extending about 135 miles between the small towns of Paxson and Cantwell, the Denali Highway (or Alaska Route 8) is a less-traveled route with some of the most scenic views the Alaskan Range has to offer.  From the mid-1950s until the early 1970s when the Parks Highway (Alaska Route 3) was built, the Denali Highway was the only road access to Denali National Park.

The road is not plowed during the winter months and is only accessible by over-the-snow methods (dogsled, snowmobile, skiing).  Only the first 20 miles on the east end from Paxson and the last 2 miles on the west end from Cantwell are paved—the remainder of the “highway” (a misleading idiom in this instance) is dirt and gravel with potholes and washboards.

Limit your driving speed and be aware of rapidly changing conditions, pack extra patience, and be prepared for possible flat tires from the sharp gravel.  The trip is worth it for those willing to take the time.

On a clear day, Mount Denali (formerly Mount McKinley) can be seen around 124-131 miles west of Paxson. Denali is North America’s highest peak—at 20,237 feet high—and has a greater base-to-summit rise than Mount Everest, with roughly 80% of its bulk rising above the surrounding landscape.

Mount Wrangell is an active volcano that can also be viewed around 13 miles west of Paxson, and is considered to be the most northern volcano on the Pacific Rim “Ring of Fire.”  Views of Mount Hayes, Hess Mountain, Mount Deborah, and many impressive glaciers can be seen along the route as well.

The Alaskan Range extends in a huge arc from the Cook Inlet north, and then west to the Canadian border. It follows several fault lines that resulted from the tectonic collision of the Pacific plate being shoved north under the North American plate.

Subsequent glacial activity during the last Ice Age (about 15,000-10,000 years ago) created the landscape you see today: dramatic U-shaped valleys, mounded piles of dirt and boulders scraped up by the glaciers, and then left behind as the glaciers retreated into the valleys, called moraines. 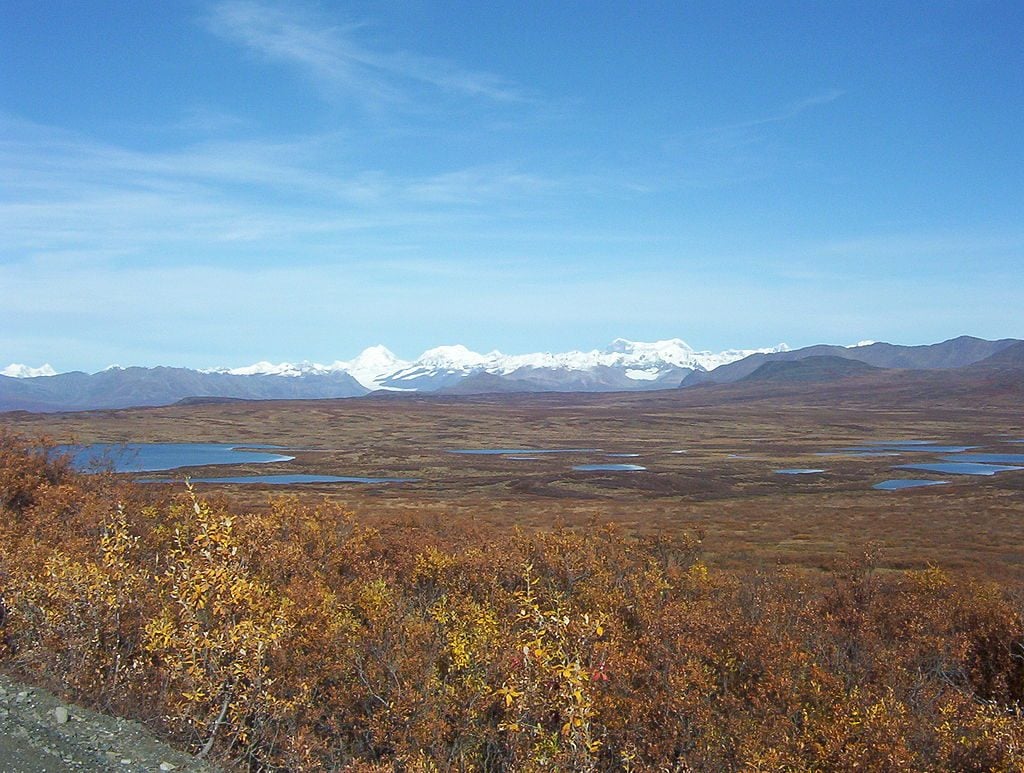 Photo of Kettle Lakes on the Denali Highway. Taken by Beeblebrox at English Wikipedia, CC BY-SA 3.0

Small circular depressions and lakes (known as kettle lakes) formed when ice buried in the glacial debris melted. They can be viewed about 42 miles west of Paxson.  The area has a rich placer gold mining history with the Valdez Creek mining district. The miners pioneered the beginnings of the Denali Highway as their access route to the goldfields.

Throughout the journey, you’ll see two of Alaska’s major habitats.  The eastern end of the Denali Highway is primarily a tundra biome, with stunted vegetation and rocky soils.  Winds can blow, and the permafrost prevents water from infiltrating, which creates ponds of cold, clear water.

The western end of the Denali Highway is largely a taiga biome, with spruce and birch forests.  Wildlife is plentiful with potential sightings of trumpeter swans, brown and black bears, wolverines, fox, moose, caribou, wolves, martin, and lynx, just to name a few.  Grayling, Dolly Varden, and lake trout are plentiful in the clear water streams and lakes.  Fishing licenses are required.

The area around the Denali Highway was traditionally inhabited by the Athabaskan people, dating back at least 10,000 years to when people migrated to North America across the Bering Land Bridge during the last Ice Age.

Many archaeological sites are located along the Denali Highway, particularly around the Tangle Lakes area 20-25 miles west of Paxson, which is listed on the National Register of Historic Places.  Please be respectful of these locations, and stay on designated trails.  Remember that collecting artifacts is illegal.

There are BLM campgrounds at Tangle Lakes (20 miles west of Paxson) and Brushkana Creek (104 miles west of Paxson).  Hookups are not available, and spaces are offered on a first-come, first-served basis.  Additionally, there are areas for pull-out camping on public lands (much of the land along the highway is privately owned, and camping may not be allowed).

Cell service is not available through most of the area.  There are several lodges located along the route—Maclaren River Lodge, Alpine Creek Lodge, and Backwoods Lodge are open year-round.  Other facilities may be open seasonally.

There are no gas or service stations along the Denali Highway, however fuel and other amenities are located in Cantwell on the western end of the highway, including RV sites at Cantwell RV Park. You can also pick up a recent copy of The Milepost for more information. 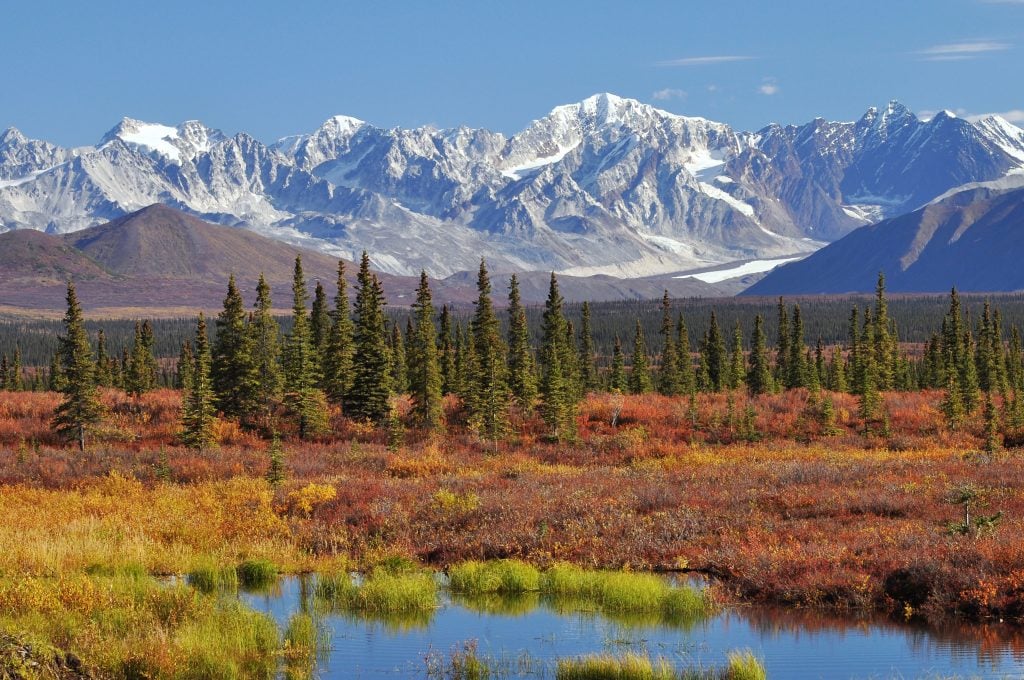 Monahan Flat and the Alaska Range, as seen from the western side of the Denali Highway in the fall (Photo by Paxson Woelber – Own work, CC BY-SA 4.0)

There are plenty of hiking trails to explore, streams & lakes to fish, and space to find inner peace. But if you’re looking for something even more special, stop by the Alpine Creek Lodge for a hot meal and custom adventure with the Bondy family. They’re sure to provide you with warm Alaskan hospitality and guiding services to accommodate a variety of experiences.

Have you ever driven Denali Highway? We’d love to hear your stories below.