You are here: Home / Blog / Discover New Experiences in Chemainus, BC
This post may contain affiliate links or mention our own products, please check out our disclosure policy here. 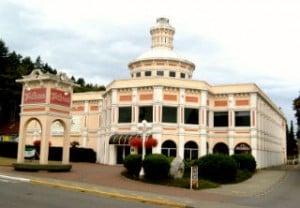 The acclaimed Theatre Festival Creative Centre in Chemainus, BC.

Not so long ago, I RVed for several weeks on British Columbia`s Vancouver Island. My first stop was Chemainus, which is an hour north of Victoria, situated between the mountains and the ocean on the island`s east shore.

While perusing this artful, stress-free village I discovered quaint shopping, excellent eateries, trendy boutiques, and the area`s world-famous murals. I also discovered the acclaimed Theatre Festival Creative Centre and enjoyed a production of The Wizard of Oz. The tiered seats were steep enough so one could see all the action and the acoustics allowed every word to be heard. I felt I could be sucked into the tornado at any time.

Thirteen cast members danced, sang, and sometimes disappeared via a hole in the stage or appeared through a window on the back wall or above us on a screen. They were all very young, very enthusiastic, and very good. The costuming was fantastic and the girl who accompanied Toto in all his moves and doggy performances was phenomenal. Whether endangering a make-believe tree or questionably sniffing a leg, Toto often stole the scene. The whole cast was thoroughly bewitching.

Exiting the theater into the warm, balmy evening, my heart smiled but I realized I wasn’t in Kansas anymore. I climbed into my RV and headed further north with a new experience to remember.