You are here: Home / Blog / Downsizing Dilemmas Before You Hit the Road
This post may contain affiliate links or mention our own products, please check out our disclosure policy here.

So you want to hit the road and live an unconventional life as a permanent traveler? Congratulations! As someone who enjoys this freedom, I wholeheartedly recommend giving it a try. However as you’ll soon discover, getting ready for the lifestyle can be complicated and time consuming. The biggest time suck: downsizing all your stuff. 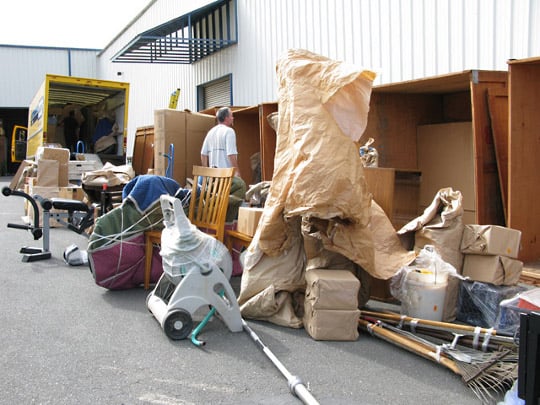 Look at all the dumb things we stored!

How to Get Rid of Stuff

Take a look around your home and check out all of your stuff. It probably took you a while to collect all that bric-a-brac, right? Well, now it’s going to take you a while to shed it.

Some of your stuff is sentimental, some of it is junk, either way, you’ll need to find a home for all of before you head out. Many full-timers start to downsize their stuff at least several months before starting to travel. Through a combination of eBay, Craig’s List and neighborhood yard sales, full-timers go crazy getting rid of stuff!

The easiest way to decide what to keep and what to ditch is to ask yourself:

Am I willing to buy this item again if/when I stop traveling?

I’ll use our case as an example. We had to figure out what to do with all the stuff crammed into our 3,700 square foot Victorian home/office. Among the heaps of stuff, we had scads of cheap, Chinese-made things like electronics and kitchen appliances. Since those things are low-priced enough to replace anytime, it all went straight to our yard sales.

However when it came to heavy-duty items like furniture, we gave extra consideration to things that would hit our pocketbook hard if we wanted to replace them. For instance, we have a really nice, vintage bedroom set that we adore. I’m such a tightwad, I’d never spend the money trying to replace it. That went into our storage unit.

If you’re having a hard time deciding what’s priceless and what’s clutter, ask yourself this:

Is it worth paying for each month?

If you’re part of a duo, be prepared for agonizing possession negotiation. Typically, one of you will be more sentimental than the other and what one person is ready to toss, the other might cringe at the thought of. In both cases, if you’ve never had to downsize before you’ll find that letting go of sentimental things is hard.

Cut More Than You Think is Necessary 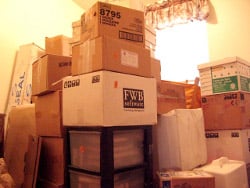 This was not downsizing.

The last thing to remember when you’re downsizing your stuff is: when you think you’ve gotten things down to the bare necessities . . . do it again!

We thought we had pared down enough, but two years later when we finally got to our storage unit, we were stunned at the amount of dumb things we kept. I kept asking myself “WHY did I keep this stuff?!”

We never missed most of what we had in storage. Some items I wish I had dumped include:

As you embark on the chore of downsizing, you’ll be amazed at the strength you can muster up when you really start cutting the clutter out of your life. That’s why it takes at least two yard sales and several months to get there. Go through this process methodically and carefully and you won’t regret that storage bill when you’re on the road.