You are here: Home / Top Stories / A Drive through Mining History
This post may contain affiliate links or mention our own products, please check out our disclosure policy here. 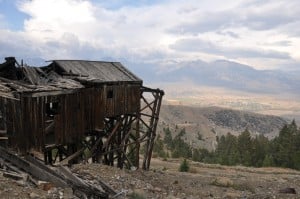 If you love western history, scenic views and riding ATVs, then you will want to include the Mackay Mine Hill Tour on your next RV outing through southern Idaho. The tour offers mining buffs, historians and those with an interest in archaeology an opportunity to explore the hard-rock mining history of the White Knob Range by driving and walking through the ruins of a mining operation that ceased decades ago. Historical reminders of mining days include weathered buildings, heavy equipment and mining tools that were abandoned when the mines shut down.

Mackay Mine Hill was active from 1879 to 1949 and supported the towns of Mackay, White Knob, Cliff City and Houston. The mines produced primarily copper ore to the tune of nearly four million (1914) dollars. Over 62 million pounds of copper is not all the mines produced, other valuable minerals mined on the hill include 15 million pounds of lead, 5 million pounds of zinc, 2 million ounces of silver and 42,000 ounces of gold. Through years of mining, men using pneumatic drills, pickaxes and tons of dynamite dug over 20 miles of tunnel through the mountain in search of precious metals

The driving tour was opened to visitors in 2004 and includes 20 historical stops along 24 miles. The tour is open to ATVs, motorcycles and passenger vehicles. The tour is divided up into three vehicle-classified routes designated by colors on the map. One portion (red) follows the old narrow gauge mining railway and is open to vehicles up to 50 inches wide. High clearance vehicles are recommended on another portion (blue) and the largest portion (green) of the tour is open to regular passenger vehicles.

Without the efforts of Mackay residents, the tour would not exist today. In 1999, the Post Register newspaper reported that Timber Creek Inc., a regional salvage company, planned to tear down historic structures and put the weathered timber to use decorating multimillion-dollar homes in nearby Sun Valley, Idaho, as well as Aspen and Vail, Colorado, and Jackson, Wyoming. They had their eye on the “headhouse,” the most impressive and massive structure on the mountain. It was where ore was stored before being transported down the mountain by tram and train.

When Mackay residents learned of the plan to steal the area’s heritage, they came together and quickly went on the offensive to save it.  “It got the town up and on their feet,” said Otto Higbee, who served as MacKay mayor from 2004 to 2012. “They decided they weren’t going to let that happen to the mine hill.” A major victory came when a local surveyor presented evidence that some of the headhouse was on U.S. Forest Service property. To further protect the structures and create public awareness, Mayor Higbee obtained grant money to get the mine hill tour started.

Now that you know the background, let’s look at some of the more interesting interpretive stops along the tour. 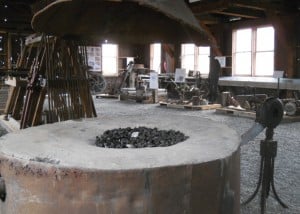 Smelter Site Ruins & Buildings
This site was the location of a smelter complex designed for 600 tons of ore per day to produce “blister” copper, using two huge blast furnaces and a 120-foot stack. It was built in 1901-02. Trouble arose from the start due to lack of metallurgical knowledge and the need to augment processing with ore shipped from afar. By 1908 it was shut down, although it served as a concentrator until the 1940s. The Shay engine house, machine shop, an eight-hole outhouse and early masonry remain along with many of the hand tools that were used.

Aerial Tramway Headhouse
The headhouse is one of the feature attractions on the tour, still standing tall on a precarious slope amid spectacular views of the Big Lost River Valley and the soaring Lost River Range beyond. This structure, located at the 700-foot level of the mine, was the upper terminal and loading station for the gravity-powered aerial tramway system that connected the mines with the smelter below. Placed in operation in 1918, the system replaced the Shay mining railroad, in operation since 1905. This aerial tramway consisted of ore buckets traveling on a six-mile-long loop of 1 ¼-inch steel cable supported on 36 wooden towers. Ore was delivered to the top of the headhouse structure from a nearby tunnel. Today what remains of the headhouse loading station is still a formidable sight. Look closely to see examples of expert timber joinery and craftsmanship done almost a century ago.

Alberta Level & Tunnel Site
At the 700-foot level, the Alberta tunnel was the center of the Empire Copper Company’s mining activity. The tunnel, started about 1900, goes in over 4,000 feet and ties to miles of crosscut tunnels, shafts and raises. This site was also the unloading point of a long surface tramway providing ore transport from tunnels far above. It also was the top dumping spot for the huge trackside ore bins on the Shay roadbed hundreds of feet below. This site had a blacksmith shop, warehouse, dwellings and bunkhouses, as well as a large plant with two boilers that generated steam to drive generators and air compressors. Today, only the shells of the blacksmith and warehouse structures remain, along with the concrete foundation remnants of the steam and compressor plant.

These are just four of the 20 interpretive stops along the route. Keep a sharp eye out, as there are many more unmarked points of interest along the way for those inclined to find them.

If you are an adventurous RVer, like I am, then don’t miss the Mackay Mine Hill driving tour. It is usually open from May to October, and offers days of exploring and discovery for the whole family.

To reach the Mackay Mine Hill Tour, take U.S. Highway 93 to Main Street in Mackay. Turn southwest on Main Street, which becomes Smelter Avenue after four blocks and follow the signs.

Dispersed camping: Once the pavement ends and the gravel starts, boondocking is available all along the route.  The views can’t be beat when camping on the mine hill.