You are here: Home / Columns / On the Road for Good / Earn an RV Living with TeamSnap
This post may contain affiliate links or mention our own products, please check out our disclosure policy here. 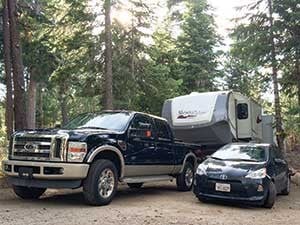 A fifth-wheel in a campground is office and home for Kyle Ries.

Earning a living is the biggest roadblock that stops non-retired RVers from living their road trip dreams. Thankfully, many companies are exploring the benefits of hiring qualified employees no matter where (or how) they choose to live, as long as they have reliable Internet connectivity.

One business that works almost exclusively with a distributed group of employees is TeamSnap, a Boulder, Colorado, tech company that creates web and phone apps to manage sports teams. The TeamSnap app allows parents, coaches, team managers and group organizers to communicate about their team through email, text and instant alerts. What makes this business so unusual is that nearly 10 percent of its employees aren’t just remote workers—they are full-time RVers too.

It’s exciting to encounter a company that’s totally fine employing a vagabonding team of techs. From Michelle Muranaka, a junior software developer who lives and works from a Mercedes Sprinter cargo van, to Geoff Lanotte, a senior software developer who full-times with his wife and kids, TeamSnap’s full-time RVers are helping to build a successful company while roaming the country.

In a refreshing outlook that many aspiring full-time RVers would love to experience with their own bosses, TeamSnap co-founder Andrew Berkowitz says, “We genuinely do not care where or how people get their work done. At TeamSnap, we judge people only on results, not on where their desk is located.”

I asked four of the six full-time RVers at TeamSnap about their experiences as remote employees and here’s what they shared with me via email about living and working on the road.

Who or what inspired you to hit the road?

“My fiancée and I both have the travel bug and knew the traditional 15 PTO (paid time off) days for most businesses wouldn’t satisfy our travel appetite,” says Kyle Ries, a TeamSnap developer. “We were actually traveling through Europe a few years back when we had the ‘How can we work and travel full-time?’ conversation and the rest is history. Buying an RV and focusing on the United States first made the most sense.”

Living a simple life is nothing new to Michelle Muranaka, a junior software developer at the company. “I’ve always been a minimalist. I don’t like to have too many possessions,” she explains. “My boyfriend and I were planning on building a tiny house, but we couldn’t decide where to park it since we move every year or so. We started looking at RVs on Craigslist and ended up looking at one and purchasing it. We never slept another night in our house after we purchased the RV.”

Some TeamSnap full-timers were bitten by the travel bug long before they started working there. JavaScript developer Matt Hopson says he’s had the vagabond spirit ever since he hit the road at the age of 16 with a drum and bugle corp. He and his wife had talked about traveling, but the light bulb moment transpired one particular Valentine’s Day when he had to work until 7:30 p.m. He explains:

“I had to be at work late (despite intending to leave early for special plans with my wife). I reflected on three years of hard work and what it all meant in that moment and realized it all came down to time. It’s the most important thing we have and I’d been sharing most of mine with the wrong person. So the conversation was started again—this time with a more serious tone —how do we make the most of this life? Before we knew it, we were RV owners!”

Geoff Lanotte, a senior software developer, says “The impetus for all of this being done in an RV was interacting with my coworkers at TeamSnap who were already doing it. I half-jokingly suggested moving into an RV to my wife and to my surprise, she jumped on the idea.”

Is working on the road different from working in a stick home? 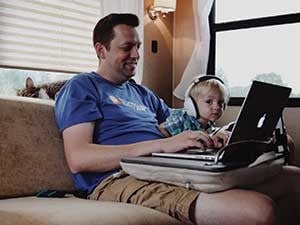 Full-timing presents many opportunities for fun distractions that can take you away from your workday. But TeamSnap full-timers understand that steady discipline pays off and enables them to reap the dual rewards of earning a steady paycheck while living the lifestyle. 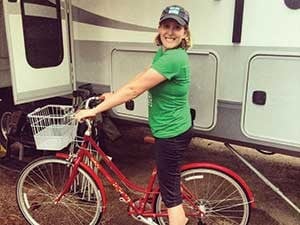 Some might think that it’s difficult to work from the RV if you have a family, but for Lanotte it’s been a simple adjustment to synchronize his work schedule with the kids. “I am (working) in the bunk house except during nap time and when the family is out and about I can utilize the rest of the RV. So I move around much more to stay in the best place to work.”

Are you encountering any Internet connectivity issues?

Reliable Internet connectivity is a common problem for anyone who works from an RV. “The biggest challenge we faced was ensuring we had access to solid Wi-Fi everywhere we went,” says Ries, who relies on a mobile Internet hotspot for getting online. “A lot of campsites still aren’t up to speed with Internet yet, so we had to do a lot of research of nearby spots where we knew we could have a fast connection.”

His colleague Lanotte says that he researched Internet connectivity issues for full-time RVers before his family hit the road, so these challenges were not unexpected. However, he adds, “We bumped up our data plans and will probably end up bumping them again and so far we have been in areas where we get good LTE coverage. RV park Wi-Fi has helped to ease some of the data burden, but you never know when that is going to work.”

How does TeamSnap feel about remote employees?

Great employees will get the job done anywhere, and awesome companies know this. Co-founder Andrew Berkowitz explains that TeamSnap owes much of its success to the distributed workforce model, which is a real competitive advantage. “We can hire the best people no matter where they are,” he explains. “Our enthusiasm for remote (and mobile) employees makes us an attractive place to work.”

Berkowitz also takes pride in having happy and productive employees. “Remote workers are better with time management because they are only judged on the work they produce. There’s no pressure to sit in an office ‘pretending’ to work. Not having ‘work hours’ also means that work doesn’t only happen from 9 to 5. We serve over 8 million customers in 195 countries, so every minute of the day someone is using TeamSnap to plan their next game. We can be there for them when we need to.”

TeamSnap’s crew of full-time RVing techies is atypical, but the distributed workforce model is becoming more common. Many of today’s most successful businesses are hiring remote workers with all sorts of backgrounds. If you are one of them and you want to hit the road, you need not postpone your full-timing dreams. Your life on the road is one job offer away!

Rene Agredano is a self-employed freelance writer, jewelry designer and animal advocate. Since 2007 she’s traveled with her husband and three-legged dog while chronicling their full-timing life on the road at LiveWorkDream.com. She also writes “The Full Timing Nomad” blog at rvlife.com.