You are here: Home / Top Stories / Earning Money on the Road
This post may contain affiliate links or mention our own products, please check out our disclosure policy here.

You want to travel and you like the idea of an RV. Maybe you are considering full-time RVing. But then, there’s the matter of making the lifestyle work financially. You may wonder how people whizzing past you on highways in motorhomes or pulling fifth-wheels and trailers afford travel.

Workampers come from all parts of the country, bringing different backgrounds and reasons for traveling and working. Most are couples; many are retired. Some are solo travelers. In the last few years a growing number of young families have taken to the road, ditching a stick and mortar house, their jobs, and public schools to travel with their children. They may have different reasons for Workamping, but all share the common and compelling desire to see what’s around the next curve or over the mountain that looms before their windshields.

Jobs on the road are as varied as the RVers who seek them. Many people immediately connect Workamping with campgrounds. Indeed, there are numerous jobs across the country in campgrounds of all descriptions: private, membership, federal parks, state parks, and county or city parks. Solo Workamper Joy Ethridge has worked in private parks from Missouri to Montana, and from New York to Texas. Joy has also worked as a waitress and a clerk in the bookstore at Mount Rushmore National Monument. She has managed a kiosk for See’s Candies in city malls and worked the peak season at amazon.com fulfillment centers in Kansas and Kentucky. Joy’s reason for Workamping? Starting a new life following a divorce.

Mike and Claudia Bezares had planned to retire, buy a motorhome, and Workamp. However, the closing of Mike’s company in Jacksonville, Florida, sped up their schedule for going on the road. Mike and Claudia, too, have worked in campgrounds—one in Nova Scotia and another in upstate New York. In between, they worked at a jewelry store in West Yellowstone, Montana, and in shipping for amazon.com in Kentucky during the busy weeks prior to Christmas.

Ron and Kristin Dale actually reversed the typical RVing pattern, living and working in their early marriage from a 40-foot fifth-wheel with three slides and pulled by a dually truck. When they decided to have a family, they returned to their roots in Western Kentucky. Ron opened a taxidermy business. Surgery on a thumb brought the diagnosis from his doctor that he should no longer do the taxidermy business. The couple decided to go back to full-time RVing, taking along their children, Aubrey, a toddler, and 7-year-old Ronald, plus their cat, Oreo. They downsized from their big fifth-wheel to a 24-foot trailer.

Ron and Kristin take turns working and home schooling Ronald. They have worked at campgrounds from Louisiana to the Wisconsin Dells. They, too, worked a peak season at amazon.com in Campbellsville, Kentucky. On weekend shifts, the teenage daughter of another Workamper in their RV park babysat for them.

“Where we want to travel is more important to us than the job,” Ron says. “We’ll find the jobs once we get there. Our whole lives are dedicated to the family core. We decided the best way to put our family first was to shed the demands of daily living.” 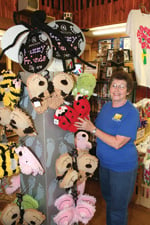 Reta Averill’s RVing parents gave her and her husband, Richard, the idea for taking to America’s roads in retirement. Their plan for Workamping came from their goal to get to know the people and customs of particular areas of the United States.

“The earnings and amenities are a bonus that defrays our living expenses,” Richard says. “But meeting folks, keeping in touch via e-mail, and then meeting again as we travel to another place, is the most fulfilling part.”
Their eagerness for new experiences has led them to different Workamping situations, including both volunteer stints and paying positions. By accident, they fell into their first job at Big Bend National Park. After Big Bend, Richard and Reta volunteered 14 hours each per week in exchange for their campsite at Belfair State Park on Hood Canal across Puget Sound from Seattle. The Averills spent two summers working at an RV park in Mexico, New York, their first Workamping-for-pay experience.

Richard says, “Three years later, we accepted jobs at Associational Island, a 65-acre island with a causeway that provides access from the mainland. Reta worked in registration and I worked in maintenance. In another year, we worked at RiverBend Motorcoach Resort, a Class A motorhome resort with lots for sale and lease. Reta again worked in the office and I manned the guard station, operating the entry gate. We worked 40-hour weeks with pay for all hours plus a full-hookup site, Wi-Fi, cable, discount at the clubhouse, and full use of the facilities. If not for Workamping, we could never afford to stay at such an upscale resort.”

For one Christmas season, the Averills worked five days a week at Silver Dollar City, Branson, Missouri. “We dressed in 1890s costumes and managed a concession for s’mores,” Reta says. “A covered wagon held our supplies and we had a table with hot chocolate and two charcoal pits. Guests toasted marshmallows on long skewers, and then placed them on a large chocolate chip cookie covered with fudge.”

Silver Dollar City offers no accommodations for its Workampers, so the Averills stayed at a nearby campground.  On weekends, they worked from 11 a.m. until closing at 10 p.m.

Richard and Reta also have done seasonal work at amazon.com and did stints as gate guards for a company in Texas. They said the gate-guarding job wasn’t physically demanding, but confinement to one spot round the clock required some adjustments. One person had to be on duty at all hours, so they learned to sleep in shifts.

Most recently, the Averills served as campground hosts for the U.S. Army Corps of Engineers at Horseshoe Bend Campground on Beaver Lake in Arkansas. They bid for the contract, which is a three-year commitment.

For these individuals and thousands of others traveling America’s roadways, working plus RVing equals Workamping. The experiences, the reasons for seeking jobs, and the rewards each takes away are different. But the common thread remains: wanderlust.

For information about Workamping, check workamper.com.

Arline Chandler is a former teacher who has written five books and numerous magazine articles. She and her husband, photographer Lee Smith, live in Heber Springs Arkansas. Her daughter, Debbie, was one of the founders of Workamping. Arline writes a blog, “RV Travel Tales,” at rvlife.com.