You are here: Home / Top Stories / Embrace the Mojave
This post may contain affiliate links or mention our own products, please check out our disclosure policy here.

Embrace the wind! That’s what I saw a woman doing on a windy day in Mojave National Preserve. It wasn’t as windy as it would get that night when RVers remained snug in their rigs and tenters battled with flattened tents, but it was windy enough to be annoying. I watched amazed as the young woman opened her arms to the wind, embracing it as she hiked the Rings Loop Trail.

It became a national preserve on October 31, 1994, as part of the California Desert Protection Act. The preserve holds 1.6 million acres, most of it deep in the heart of the Mojave Desert. Almost half of the preserve, which ranges in elevation from 800 feet near Baker to 7,929 feet on top of Clark Mountain, is designated wilderness.

Mojave National Preserve is the third largest unit of the National Park System in the contiguous United States. Only Death Valley and Yellowstone national parks are bigger.  Because of its size, you won’t be able to see the entire park in one day, so it’s best to spend several days or make subsequent visits.
Fortunately, the area is easily accessible.  If you drive Interstate 15, a major route that links Las Vegas and Los Angeles, or if you drive Interstate 40, which links Barstow with Flagstaff and points east, you’ll see the signs for the preserve. 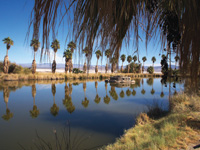 There are paved, primary roads to explore, as well as unpaved roads. The preserve is most accessible if you have four-wheel drive. On a recent trip, we stuck to the main roads, starting our drive from I-15 to I-40, via 56-mile Kelbaker Road.  Along the way we stopped to photograph Joshua trees and the Cinder Cone Lava Beds area.

On one of our visits we had lunch at The Beanery in the Kelso Depot Visitor Center. After being closed for nearly 25 years, The Beanery reopened on March 20, 2009. Back in the old days, in 1944, a typical prime rib entrée—including soup and salad, beverage and dessert—cost about $1.25.  You won’t find those prices or items today, but you will find a variety of salads, sandwiches, hot dogs, soda pop, milkshakes and fruit smoothies.

Kelso Depot Visitor Center has a wonderful museum worth exploring.  During our visit we checked out the wildflower photography of Terry Ellis and enjoyed her unique perspective on life in the desert.

In the heart of this desert landscape, you’ll find two campgrounds:  Hole-in-the-Wall (HITW) Campground and Mid Hills Campground.  HITW is recommended for RVs up to 33 feet, although there are a few pull-through sites that can accommodate longer RVs. Campsites at Mid Hills Campground are more intimate, best for tents, camper vans, small motorhomes and truck campers. It’s nestled among some pinyons and junipers, though much of it burned in 2005.

On our first visit we entered the preserve from the south via Essex Road. En route to HITW Campground, where we were based for a couple of days, we stopped by the adjacent Providence Mountains State Recreation Area and Mitchell Caverns Natural Preserve, which have since closed indefinitely. 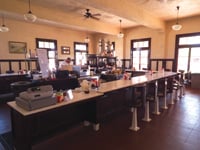 Most of our days were spent outdoors exploring trails. We stopped at the Zzyzx (pronounced zye-zix) parking area, five miles south of I-15 on Zzyzx Road, and walked the short loop around Lake Tuendae. We hoped to find lots of bird life, but we struck out. However, we enjoyed the palm trees, of which there are three varieties:  California fan, Mexican fan and date palms.

Desert Boondocking
We spent time at developed campgrounds, but we also enjoyed roadside camping, permitted in certain areas. You’ll find a list of designated sites in the park newspaper, all of which are near paved, graded and two-track roads.

We enjoyed roadside camping near Teutonia Peak.  After settling in, we hiked a little more than three miles round-trip from our site to near the very rocky top of Teutonia Peak. Along the way we marveled at the world’s densest Joshua tree forest and enjoyed see-forever views of the surrounding area.

We hiked a favorite trail, the Rings Loop Trail, at the HITW Information Center near the campground.  It was on this hike where we discovered the mystery of how Hole-in-the-Wall got its name. If you also decide to hike through Banshee Canyon, then you, too, will know. We ascended the narrow canyon by using metal rings mounted in the rock.  We also saw some petroglyphs along the way.

We learned a bit of history while hiking Rock Spring Loop Trail. The one-mile loop trail starts at the Rock House, which was constructed by Bert Smith in 1929. He came to the area after being exposed to poison gas in World War I. He was told he didn’t have long to live, but the dry desert air was so beneficial he lived another 25 years. The trail passes the house, now closed, and continues to Rock Spring, one of a series of springs that dot the Mojave Desert. Exhibit signs near the springs tell of the Mojave and Chemehuevi Indians who once lived in the area. They also describe Camp Rock Spring, an army outpost active in the 1860s.

Elusive Find
Always in search of wildlife, we spent days hoping to see a desert tortoise until one afternoon we discovered one walking near Kelbaker Road. We spent about an hour with the treasure, watching it move, watching it do nothing, just admiring the creature for being there. Desert tortoises are both state and federally listed as threatened. If you find one, please don’t touch, just marvel that you were privileged to see it.

Another time we camped roadside across from Kelso Dunes, where we had an awesome view. During our dunes hike we found more treasures in a Mojave fringe-toed lizard, a type of snout beetle, and grasses growing on the dunes.  About three miles up and back, the climb up the dunes was a little steep at times, but the views were worth the effort to get to the top.

We had heard that the dunes could sing, but we honestly forgot all about it until they started singing. I was immersed in the light and grass and sand, just looking for possible photos to take when we first heard them. We were descending the steeper, west ridge, where no one had hiked for a while, when we heard it.

At first we both thought there was a jet flying over, and then we remembered that these dunes could sing. Mike kicked the dunes, we saw them avalanche, and we heard the sound again—a low hum, a jet-like sound. It was the singing of the dunes.

Whether embracing the wind, listening to sand dunes sing, or watching mesmerized as a desert tortoise happens by, you will find that Mojave National Preserve is a magical place to visit.

The preserve doesn’t charge an entry fee and is open year-round, but the best times to visit are spring, fall and winter because temperatures soar in summer. The best time to see wildflowers is from mid- to late-March at lower elevations, although it depends on the amount and timing of winter rains. Joshua trees, Mojave yuccas, and banana yuccas all produce massive blooms late in the spring.

Mojave National Preserve is a great place for those traveling with pets. Leashed pets are welcome and allowed on trails. If you want a campfire, you’ll have to buy your firewood and kindling locally.  Campfires are allowed in fire rings and other established sites.

Water is available at Kelso Depot Visitor Center, Hole-in-the-Wall Information Center, HITW, Mid Hill and Black Canyon (equestrian and group) campgrounds. There are no gasoline stations within the preserve.