You are here: Home / Columns / Silver, Single and Solo / Exercising the Quads

Our adventure took us not only through the Arizona desert but up into the Weaver Mountains, roughly from 1,300 feet to an elevation of over 4,000 feet. That, plus the possibility of rain and the dynamics of traveling 30 miles an hour in an open vehicle, made dressing in layered, warm clothing a necessity. Although dust is often a concern when this group wanders, with all the rain it certainly wasn’t a problem this day.

I was new to this loosely knit North Ranch ATV group, so I only knew a few faces. It didn’t matter. Everyone was high on life and welcomed anyone as interested in this fun activity as they were.

Winding Paths
A round trip on Nancy’s Path leading to Nancy’s Point and back is a favorite hiking trail for me. It overlooks an enormous ravine. This time I went via quad wheels where I had not gone before. My office window overlooks Saguaro Park and miles and miles of desert right to the bottom of the mountains. It looks like flat land between here and there and before I became familiar with desert land, I might have thought it was. This day encompassed traveling trails across Bureau of Land Management and Arizona State Trust land. Following paths of least resistance, we wound along wide sand trails made by recent flash floods. Water carves interesting paths through the mesquite, fragrant creosote bushes, and other desert plants.

I sort of wondered about the old lower back as we whipped around, changing directions seemingly in midair to accommodate the desert trees and bushes. I hung tight as the back end of the ATV became airborne and just as suddenly landed with a major thud that produced an involuntary gasp. Ray looked around to see if I was OK. I kept most gasps in check because I wanted him to keep his eyes on the road!

Those gasps were nothing to the ones I emitted as we went down several very steep washed-out rock hills. It wasn’t the ups and downs that bothered me so much as going into a rut that took us on a steep, sidewise slant that, but for Ray’s expert driving skills, would have flown us head over heels. Y’all know I like life on the edge, but I didn’t anticipate swallowing my teeth (or screams).

From the streambed’s pure sand, we headed into the high country that was normally brown. Lush green grass grew everywhere but in the streambeds and on bare rock. It would have made a Michigan cow pasture envious. As a matter of fact, sloe-eyed Arizona cattle followed our trespasses. A carpet of very tiny, very short pink flowers thought they had discovered spring. I knew from experience that walking across them would turn the toes of white tennis shoes pink.

Rough Road
An hour into the trip, we stopped for a break. It felt good to stand up, and I had already seen Ray shaking his hands a few times with the strain of gripping the steering wheel so tightly. With mountains all around, the scenery was spectacular.

We hit the gravel road to the gold mining town of Stanton and continued climbing the old stagecoach road to Yarnell. Although I have driven this extremely rough, narrow road in my Chevy Cavalier, it was a slow trip even with the quads. All the rain made it rougher than ever, but that same rain also produced rushing streams and gushing falls where it was normally dry. Washouts and rockslides proliferated in the narrowest section. I lifted the digital camera well above Ray’s broad shoulders and aimed at the road ahead. Pictures came out with no jiggles.

In Yarnell, we zipped over to a parking space with the others and proceeded into the Ranch House Restaurant for lunch. I have been there many times with half the Presbyterian Church congregation after Sunday morning services. As always, the restaurant received us in good humor, producing excellent food and service. We drove in two groups, one leaving at 9 a.m. and the other at 10 a.m. so our lunch break would not overwhelm the restaurant. After a leisurely lunch, we started our descent following the same route until we arrived back in Stanton, this time for a get-rid-of-lunchtime coffee stop.

Looking for Gold
Stanton was established in 1866 with the discovery of potato-sized gold nuggets at Rich Hill. The town was named after Charles Stanton, whose fascinating, if murderous history, is told in The Story of Congress, by Rose Mary Goodson. The Rich Hill gold dwindled to the point in 1968 that the ghost town of Stanton was the winning prize in a jingle contest sponsored by the Saturday Evening Post. Owned by the Lost Dutchman Mining Company since 1978, Stanton operates as a private mining club. Members stay in the RV campground, gold prospecting and searching not so much “in vein” as in the washes for more of those “potato-sized gold nuggets.”

When the ATVs took off through the desert again, they took an entirely different trail. Not as many steep hills awaited us, but we didn’t lack for those sidewise climbs that turned my gray hair back to black.

All too soon, we breezed through the back gate at North Ranch. Ray accepted my effusive accolades for the terrific new adventure and a mission well done, but he still made me wash the ATV! God Bless. 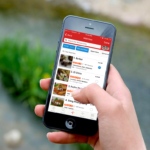