You are here: Home / Blog / Experience Arkansas’s Historic Washington State Park
This post may contain affiliate links or mention our own products, please check out our disclosure policy here. 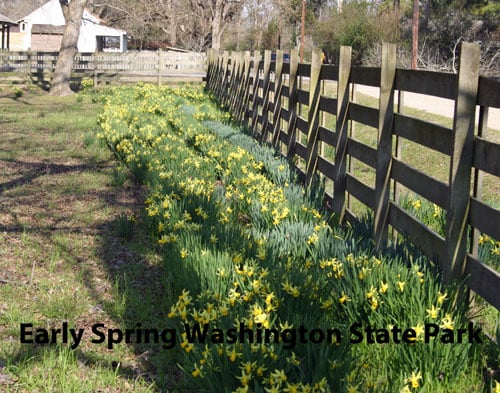 Arkansas has 52 state parks. Many have camping facilities and outdoor activities. Others are day-use parks, focused on history or preservation of culture in a particular region and time. Old Washington State Park, located in southwest Arkansas, majors in historical conservation and restoration. The park that exists within a still-viable community could be called “Arkansas’s Williamsburg.”

Twelve years before Arkansas achieved statehood, Washington was founded atop some sandy hills at the junction of several Native American traces, including the Southwest Trail that became Arkansas’s first road. In the usual manner of frontier America, the first two structures built in the new town back in the 1800s were a tavern and a religious meeting house. Many houses and shops followed, ranging in classic styles of Southern Greek Revival and Federal architecture, Gothic Revival, Italianate, and the pioneer hand-hewn timber framing construction. Period architectural features and demonstrations of pioneer lifestyles recall Washington’s prominent 19th-century history from 1824 to 1900.

Stretching from St. Louis diagonally across Arkansas Territory to Washington, the old Southwest Trail traveled another 15 miles to the Red River steamboat port of Fulton. At that time, the Red River separated United States’ lands and territory beyond the Mexican border, then known as Texas. Because of its location, Washington played a role in Texas’s 1835-1936 war for independence. Evidence suggests that in 1934 Sam Houston and others discussed plans for the revolt in one of the town’s taverns. Volunteers heading for Texas battlefields passed over the road, including the famous Davy Crockett and Jim Bowie—both caught in the siege of the Alamo. Jim Bowie is best remembered for the knife that bears his name. James Black, a Washington blacksmith, is believed to have made the original famous knife for Bowie in 1830 or 1831. The claim can be dated as far back as an item in the town’s weekly Washington Telegraph. 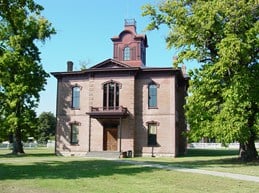 Washington is best known as Arkansas’s Confederate Capitol. When Little Rock fell to Union forces, the state’s government relocated its capitol to the Hempstead County Courthouse standing in the center of Washington. The capitol remained in Confederate hands throughout the Civil War, thus protecting the community’s antebellum structures. Today, Washington is considered a second-class city, bowing to a new settlement named Hope when the area’s first railroad ran eight miles south of the old capitol. Catastrophic fires in 1875, and again, in 1883, devastated Washington’s commercial district. The small town’s final blow came when in 1939; the nearby town of Hope was named county seat. 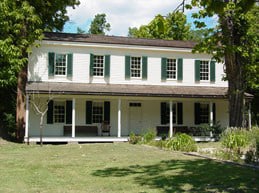 Yet, a new chapter for Washington started in the 1950s when the efforts of Pioneer Washington Restoration Foundation began restoring and preserving the historic buildings. In 1965, Arkansas’s legislature created Old Washington Historic State Park. With more than 30 carefully restored Arkansas landmarks and historic buildings, Washington now makes up the state’s largest collection of antebellum structures open for public tours. The old courthouse, presently a Visitor Center, is the heart of Old Washington. A walking tour of the historic town includes the Edwards Weapons Museum, holding more than 1,500 items that include pioneer-era rifles and pistols; the print museum, boasting equipment of the era in which the town’s newspaper existed; a re-creation of Black’s blacksmith shop; the Pioneer Cemetery, and numerous historic houses dating from 1835 to 1850. The houses are authentically furnished, giving a glimpse into domestic life over a century ago. An in-town farmstead has been created around the Sanders House, built in 1845. Based on period records, the park’s staff reproduced a barn, chicken house, grape arbor, garden plot, cold-frame structure, pigeon coop, and privy. Heirloom plant varieties grow in the garden. Live animals that would have been on such a farm reside in the barn, coops, and pens. Homes and museums are available for tours on a regular, but changing, schedule. 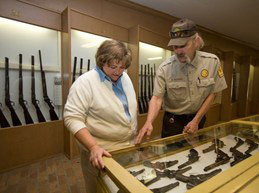