You are here: Home / Blog / Eye-Catching Buildings
This post may contain affiliate links or mention our own products, please check out our disclosure policy here. 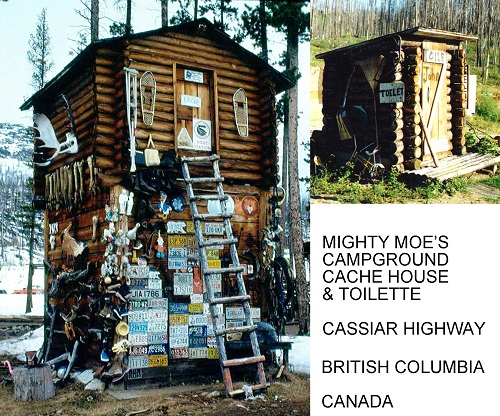 Well, I didn’t say they were necessarily fancy buildings.  It beats what we used to use out behind the lilac bushes on the farm!  This special toilet was cabin-style and some of you might recognize it from “Mighty Moe’s” primitive campground on Cotton Lake along British Columbia’s Cassiar Highway on the way to Alaska.  The other cabin was built well off the ground with a ladder going up to the door, a “bear cache,” designed for food storage outdoors that bears and other animals cannot get into.

Mighty Moe was an eccentric backwoods Canadian character who entertained his campers with outrageous stories and playing a long-handled frying pan as a guitar.  I stopped there on later trips and the place had been sold, he was in a nursing home, and even the campground that replaced his campground had gone by the wayside.  If you drove the Cassiar during late 1980s or early 1990s, you will remember Mighty Moe. 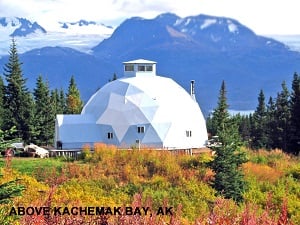 Y’all know how I love Alaska, and one of the times I was up there I drove the East End Road overlooking Homer and  Kachemak Bay and saw this magnificent igloo-style home.

I loved this big strawberry building by the side of the road somewhere in New Brunswick.  I believe it was part of a store that sold strawberry jams, etc.  A lot of years ago driving Utah’s Route 89, Joe’s International Rock & Gem Shop would come into view and you just couldn’t pass by without stopping and looking around.  I wonder if it still exists. 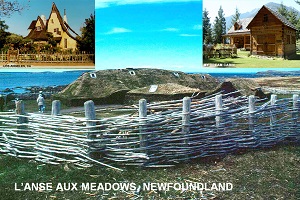 L’Anse aux Meadows is a National Historic Site in Newfoundland/Labrador.  The first authenticated North American Viking Settlement is also a World Heritage Site and may have been used for a base camp to repair boats and lay in supplies.  They were restored huts made from thick peat layers sandwiched with sand and gravel.  Ceiling holes provided smoke escapes.  With winter winds blowing, one can only imagine how bleak it must have been in that wide-open space where nothing grows but stunted vegetation.  It hadn’t changed much in a 1,000 years since that hardy group of Norsemen and women landed at what they called “Vinland.”

On the left is a fascinating house.  I have no idea whose house this was in Los Angeles, but I couldn’t go by without taking a picture.  It looks like it is straight out of a fairy tale. I couldn’t find it again if my life depended on it.  The one on the right is a sweet log cabin built at the end of a very long lake in Washington, but I won’t tell you exactly where it is.  I would love to see the inside of it, but I can only dream of living there!

It was so much fun discovering these wonderful places on my trips.  I hope you are finding lots of unusual places in your travels.  God Bless until next week.