You are here: Home / Blog / First Glance: Motoring Memories
This post may contain affiliate links or mention our own products, please check out our disclosure policy here.

There was a time when I bought a new car about once every four years. In my experience, once a car hit 80,000 miles and was paid for, it became a money pit—better to get rid of it and move on.

Perhaps my problem was my choice of cars. I don’t know anyone else who bought two Chevrolet Corvairs brand new, 1960 and 1964. The cars fell apart (see Ralph Nader’s Unsafe at Any Speed), but I liked them. Then I bought a couple of Ford Granadas.  There’s a reason they don’t make those anymore.

Many cars later, I found two automobiles that lasted—a 1990 Buick Park Avenue and a 1993 Ford Taurus. I still have those cars and haven’t bought another one since. I sometimes wish I had a new car with all the current gadgetry—the ability of the car to park itself, the GPS lady to tell me when to turn, an electric cord to plug in batteries and save on gas. But then I’d have to give up the Park Avenue, with its roomy interior that very few new cars can match, and its cherished history of reliability.

These thoughts were in my mind as I drove the Park Avenue down Interstate 5 through Seattle to Tacoma to see the big new museum that houses 350 classic cars, trucks and motorcycles.

Alas, the Park Avenue isn’t a classic car. It’s just an old car, but it has served my wife and me well. I thought we might sell it after my wife was carjacked in it, but she insisted we keep it because to her, it is the ideal car.

Most people are nostalgic about the cars of their youth, but my first couple of cars were ordinary transportation. The young photographers at the California newspaper where I started in journalism had the vehicles I envied—a red Corvette and a white Chevy convertible. Never did I feel more cool and carefree than when I was riding with my photographer friend John in his Chevy convertible with the top down and the radio blaring as we and two pretty young women sailed down the San Diego Freeway toward Ensenada. 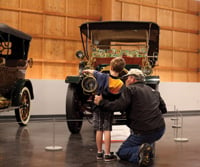 Cars evoke memories, and that’s what you will experience as you stroll through LeMay—America’s Car Museum, which opened last month along Interstate 5 next to the Tacoma Dome.

The LeMay museum has many cars from the beginning years of automobile history including a 1906 Cadillac, a 1916 Pierce Arrow and a 1921 Ford Model T, but it has more recent vintages too, cars you, your father or granddad might have owned—a Ford Mustang, Chevy Bel Air or Nash Rambler.

Most of the cars were amassed by the late Harold LeMay, a Tacoma businessman who couldn’t bear to see old cars junked.  As his widow, Nancy LeMay, put it, “My husband never met a car he didn’t like.” Harold LeMay acquired more than 3,000 cars, trucks and motorcycles, earning recognition from the Guinness Book of World Records as owner of the world’s largest privately held vehicle collection.

David Madeira, the president and CEO of the museum, said others may have assembled more valuable car collections, but LeMay, who died in 2000, gathered a rich representation of the vehicles that populated American roads over the years. And that’s why it’s called, “LeMay—America’s Car Museum.”

Visitors will find old cars that they, family members or friends may have owned, bringing back memories. They will also see expensive cars that they might have longed to own and a parade of classic vehicles that embody automotive history—a 1927 LaSalle Roadster, a 1930 Duesenberg, a 1948 Tucker, a 1983 DeLorean; the list goes on and on.

Foreign Cars Too
The museum has 770 cars from the LeMay collection that it can rotate on display. And it draws on vehicles from other collections, too. The opening exhibits include a tribute to Ferraris; an exhibit of British automobiles such as the Aston Martin, Jaguar and MG; a display of Indy 500 racecars, and a collection of alternative powered cars ranging from the 1913 Detroit Electric and 1919 Stanley Steamer to today’s Chevy Volt and Nissan Leaf.
The cars are displayed in rows down broad, gently sloping ramps that take you through four levels, with 165,000 square feet of space.  The museum’s presenting sponsor, State Farm, has collaborated with the museum to create the State Farm Theater with a 360-degree movie screen to illustrate automotive history. The museum also has banquet facilities, a café and a 3.5-acre outdoor field for car shows and concerts. Plans call for recreating the drive-in movie experience by showing movies at the outdoor field next summer.

Other attractions include an elaborate slot car racing exhibit and a group of racing simulators where you can get the virtual experience of driving competitively.

You can become a member of the museum at donation levels that start at $50 and range upward to $1 million. For $1,200, you can join Club Auto and get the right to store your classic car at the museum and receive other perks.

The museum’s backers raised more than $60 million to create the museum, and are hoping to attract 425,000 visitors a year. The opening day last month drew a crowd that included Ed Welburn, the vice president of design at General Motors, and  “The Tonight Show” host Jay Leno.

The museum’s architecture is impressive—a shiny metal exterior that feels right for a place that honors automobiles, and a cavernous exhibition hall on the top floor that looks out onto a panoramic view of Tacoma. Spread out on the top floor and three levels below are lots and lots of amazing automobiles.

You might find a car your family once owned; you will surely find cars you wish you owned.