You are here: Home / Blog / Fitting a Family into a Fifth-Wheel
This post may contain affiliate links or mention our own products, please check out our disclosure policy here. 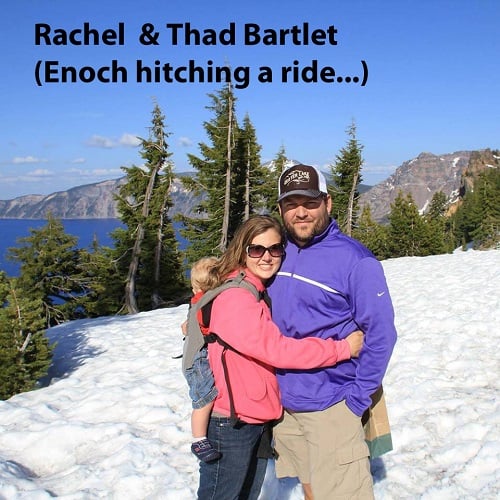 Can Mommy, Daddy, four children, and the family dog fit into a toy hauler fifth-wheel pulled by a Ford Dually? Can they live full-time and travel the United States? Yes—if they are Thad and Rachel Bartlett and their kids, ranging from a teenager down to a baby. The Bartletts are one of many families that live on the road nowadays. Yet, it takes some organization. 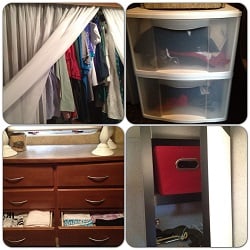 Before launching their year-long adventure as full-time RVers, Rachel Bartlett started with storage of clothes for a family of six. Their fifth-wheel had a large bedroom closet with mirrored doors. First, they took down the doors, put them in storage, and hung curtains instead. Rachel says: “Getting around the bed—especially in nighttime’s wee hours when I had to tend a baby—felt as though I was going to fall into the glass mirrors that would crash and crumble, possibly causing injuries. Instead, if I clumsily stumbled, I fell into a safety net of soft clothes.” 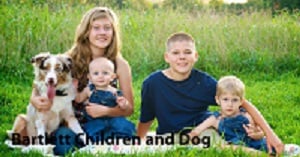 Thad, Rachel, and their oldest, Mary Kyle, shared the closet. Their second child, John Mark, stored a few clothes in the closet, but by choice, he kept his play clothes, socks, and underwear in two plastic drawers and a red bin in his cabinet in the boys’ room—or what would be called the “garage” in RV conversation. Mary Kyle had a matching red bin in her loft area over one of the fifth-wheel’s two bathrooms. Thad and Rachel shared the six-drawer dresser in their bedroom.

The little ones’ clothing went onto two shelves of a cabinet. Each shelf held one Rubbermaid® shoebox-sized box. One box contained outfits, the other, “loose” clothes like shorts and t-shirts that did not necessarily match. As Rachel finished laundry, she loaded the boxes from the back so Jeremiah and Enoch did not wear the same thing each day. When dressing the children, she pulled clothing from the front of the box. Their two or three “church” outfits stayed at the very back so they would not be worn day-to-day. Rachel says, “The best benefit to this system: If someone else chose clothes for them, they most likely matched—at least, in theory!” 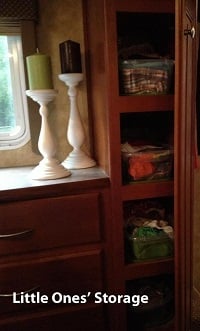 The little boys also shared one more shoebox that contained pajamas and socks, and was stored in a smaller cabinet. Rachel says she could have fit two boxes on each shelf, but she realized the children had plenty of clothes—and with less, it all stayed organized with little moving and shuffling. “Just a wee bit of difference from the days in our sticks and bricks house when they had so many baby clothes that they outgrew them before they could wear all we had of a certain size,” she adds. 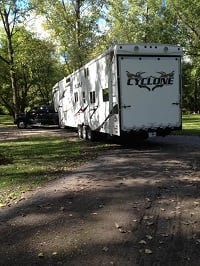 The Bartletts stored winter coats and some warm clothing in the middle couch storage area. Rachel says, “We laughed when we first hung all our clothes up in the RV and they fit in the closet with no problem. A big change from the walk-in closets we were used to in our house.”

After a calendar year on the road as a family, the Bartletts are back in a rented house in their home state of Georgia, preparing to build a new home. Their fifth-wheel has no “for sale” sign—yet. RVing is in their blood. Some day, they plan to repeat their cross-country adventure—maybe traveling longer than a year.