You are here: Home / Top Stories / Five Favorite Baja Beaches
This post may contain affiliate links or mention our own products, please check out our disclosure policy here. 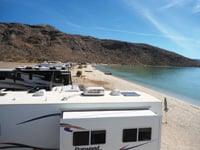 Longer than the state of California, Mexico’s Baja California is a sun-drenched paradise with 2,000 miles of coastline offering spectacular places to camp. Yes, the opportunities for camping on the beach have diminished in Baja since our first trip there in 1985, but they still exist and, best of all, some remain free!

With the Pacific Ocean to the west, and the Gulf of California (Sea of Cortez) to the east, the Baja peninsula is one of the greatest ocean playgrounds you can imagine. Add in deserts, mountains and plains that are alive with spiny botanical oddities and are crisscrossed by roads, and you have a very special place.

Much of the peninsula is largely undeveloped and inaccessible except by boat, but the opening of the federal highway, Mexico 1, in 1973 created unparalleled camping opportunities, and the popularity of Baja California as a travel destination for RVers is continuing to grow. We have been frequent visitors to Mexico for nearly 30 years, and operate a tour company that leads RV caravans through Baja. Our tours include many beach stops, and we have developed five favorites, two in Baja California in the northern half of the peninsula and three to the south in Baja California Sur. 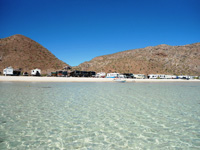 This is where we fell hook, line and sinker for Mexico. Located in Bahia de Los Angeles, on the Sea of Cortez, this is one of the few campgrounds in the northern state of Baja California that RVers identify as a winter destination. Given the unique geography, ocean currents and wind patterns, this area can often have the same daily highs regularly seen in Bahia Concepcion 155 miles farther south.  When first built shortly after the highway was completed, Brisa Marina was a full service RV park. At that time the Mexican government funded campgrounds across Baja that had generated power, laundry facilities and all the amenities at each pull-through pad. Sadly these were only in operation for a few years and have long since been either abandoned or remain open with no services, although amazingly the dump stations still work.

Although swimming is good in October and into November, the beach starts sandy but becomes quite rocky at low tide, hence kayaking and fishing are the preferred activities.  Sea lions, dolphins and whales are a common sight as are whale sharks in October and early November. The drive from Mexico 1 to Bahia de Los Angeles (sometimes referred to as Bay of L.A.) is incredibly scenic, with little traffic. The final leg, as the bay is revealed, is nothing short of spectacular. The sunrises are equally stunning and the long beach walks out to the lighthouse are serene. After you park at a pull-through pad, someone will be along to collect $5 for the local school. There are alternatives to Brisa Marina. Daggett’s down the road provides washrooms and showers, and La Gringa is at the far north end of the beach and much more remote.

RVers are drawn to Santispac by its convenient location. It is right off Mexico 1, and of the 12 beaches in Bahia Concepcion occupied by RVers, it is the closest to the town of Mulegé. The beach and bay, surrounded by steep hillsides and mangroves, are incredibly popular. We counted almost 50 RVs on this beach last February. Although it can feel a bit like an asphalt parking lot with the hard-packed sand under the motorhomes, the RVs are only 25 feet from the water’s edge. The shallow and protected bay is often swimmable even in January.

Kayaking, stand-up paddle boarding, swimming and fishing are routine on this beach.  Another draw are two restaurants. The margaritas served at happy hour at Santispak are wicked. Vendors visit this beach daily, and not only with blankets and T-shirts, but also with great local produce, fresh seafood, water, pizza, cinnamon buns, pineapple empanadas and great freshly made chicken tamales, among other items. Local tour guides are available for fishing, clamming, or just seeing the sights from the water or on land. We are always up for the sunrise and often have a fire after dark. How good is that for $6 a day?

Believe it or not, this beach, just 20 minutes from the Baja California Sur capital city of La Paz, is still free! Those RVers settling in for the winter head over to the east side; those dropping in for a short stay park on the front of the beach, right of the restaurants.  No worries about driving on the beach with any size RV, just stay on the packed-down roadway and stay out of the soft sand. (We always carry a couple of towropes, just in case.) Remember to leave enough room between you and the beach, as lots of locals still come here in the winter when the wind is down and the days are hot. The water here is spectacular, Mediterranean blue, and terrific for swimming. The days are warm, the nights cool, and simply perfect for camping.  Stand-up paddle boarding and kayaking are popular, and lots of RVers come for the fishing, with yellowtail the prized catch.  Weekends sometimes can be busy, with lots of families and young folks at the municipal palapas, playing their favorite version of “Jose Accordiano.” This is the perfect opportunity to sit back and enjoy the cultural immersion.

From your RV, you are looking directly at Isla Espíritu Santo, an island in the Sea of Cortez 3.7 miles away and clearly visible.  It is connected to Isla Partida by a narrow isthmus. You should note that Ensenada Grande beach, on Isla Partida, has been voted the most beautiful beach in Mexico by The Travel Magazine and one of the top 12 beaches in the world. Not surprisingly the area is protected under UNESCO as a biosphere, and its importance as an eco-tourism destination is the main factor. Both islands are uninhabited, but you can hire a small boat to cross the channel, and many take tours that offer opportunities to swim with the sea lions.

Fidel’s
The actual name of this campground is Fidel’s El Pabellon Palapas Alvinos. It is bordered by two other RV parks, but we are partial to Fidel’s. The location is on the Pacific Ocean side of Baja California south of Lazaro Cardenas and less than a mile from Mexico 1. The beach can be a little cool and windy, but you are sure to enjoy the ocean air and spectacular sunsets. Fidel’s normally has plenty of firewood, good washrooms, with hot (sometimes) showers and also a dump station that is almost impossible to use.  There is access to water hookups and some 20-amp 120-volt electrical outlets that cost a little extra. No worries about parking; often we are the only ones there with beachfront for 50.

The landscape of this park can change dramatically because of heavy rains, high tides and storm surge in the winter. This area of Baja is known for farming, fishing and miles of sand dunes. There are many other campgrounds/RV parks on or near the ocean in this region, but we like Fidel’s because we have an unobstructed view of the beach and Fidel lives on site and is always glad to see us and help out whenever asked. From time to time locals will drop by with fresh fish, clams or lobster, which are all good, but watch out for the mussels!

Historically Los Cerritos, which is in the tropics between Todos Santos and Cabo San Lucas, has been very popular with RVers. People flock to this beach for the swimming, surfing, boogie boarding, whale watching (yes, you often see them playing) and fabulous sunsets.  With a new four-lane highway, Todos  Santos is an easy 15 minutes away and Cabo only a 45-minute drive.

Up until about a decade ago, RVers en masse stayed at the abandoned Government RV park (similar to Brisa Marina). Then development closed access to the campground, and only those who bought a lot could stay. At the end of the 2012-13 season, Los Cerritos Surf Colony opened an RV park, which was really just a dirt parking lot, but offered access to a pool, hot tubs, washrooms, Wi-Fi, bar and restaurant. The place is pricy for Baja. When our first tour group arrived there in January, the price was $20 a night and there were about 25 RVs on site. On our February tour we were puzzled to find only one RV at the park, but soon learned a reason—the park fee had increased to $30 per day. In March, the price dropped back to $20, but then our next tour group was charged $30, so we have asked the Surf Colony for clarification.

There are many beaches on Baja that we are sure you will love. The ones we have described are accessible for RVs of any size and have room to maneuver. As always, solar power is preferred over generators, although we see a mix of both on Baja beaches.  Dry camping is not for everyone,  but many of those who give it a try, find it is well worth the effort!

Dan and Lisa Goy are British Columbia residents who started traveling in Mexico nearly 30 years ago and have operated Baja Amigos RV Caravan Tours since 2008. For information, visit bajaamigos.net.