You are here: Home / Top Stories / Live to Tell About Your Flash Flood Camping Weather Disaster
This post may contain affiliate links or mention our own products, please check out our disclosure policy here.

People often have a hard time envisioning the power of moving water. Each year when heavy rains pummel North America’s deserts or mountains, another camper endures a flash flood camping weather disaster. Those who live to tell about it are shocked to learn how these torrential desert storms can destroy everything in its path — including RVs. 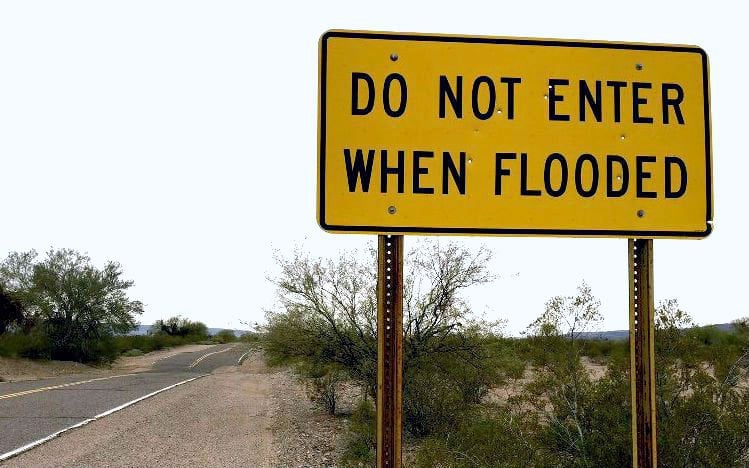 Flash floods are especially common in the desert. But according to Scientific American, flash floods can happen in both urban and remote settings. Pretty mountain areas are especially vulnerable if snow melts quickly after a rain storm. Other susceptible areas to worry are recently burned hillsides. Weather experts also say that fast moving water can take out everything in its path – even the biggest RVs. The risk is there but don’t let it keep you at home. If you know how to avoid a flash flood camping weather disaster in the first place, you can stay safe. The campsite you choose to park in is the best place to begin.

Private RV camping is the goal for many RVers. But the pursuit of privacy can put campers in jeopardy. Don’t park until you find a safe looking campsite with a lower risk of flooding. As my husband and I are RVers ourselves, how we survive bad weather on the road is by adhering to common sense and paying attention to our local surroundings. For example:

Don’t Be a Stupid Motorist

Flash flood deaths usually happen when a person drives through deep water. As little as six inches of water can strand a car in a fast moving flood. Just two feet of it can float a vehicle away – even RVs. Southwest snowbirds should pay special attention to this fact. In Arizona, motorists who get stranded in flooded roadways may be charged up to $50,000 for their rescue under the state’s “Stupid Motorist Law.”

Preparing for Weather Oddities and Calamities is all part of the RVing lifestyle and nobody expects a flash flood camping disaster. But things happen fast when water rises and it only takes minutes for a deadly catastrophe. If all else fails and you still get trapped in a campground during a flash flood, you already know not to try to drive your way out of it. Run for the highest ground you can find and you just might live to tell about your dramatic flash flood campground evacuation.