You are here: Home / Top Stories / Flipping for Profit on the Road
This post may contain affiliate links or mention our own products, please check out our disclosure policy here. 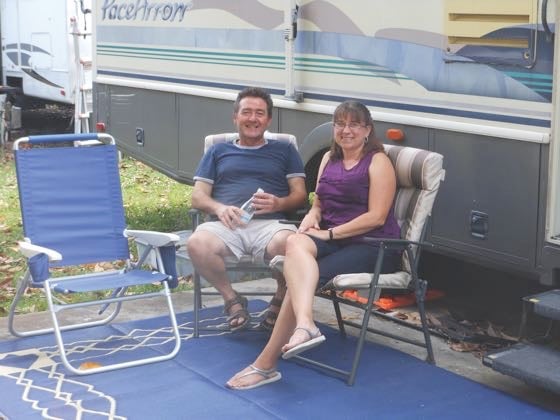 An adventurous couple from Alaska is funding its cross-country travel in a motorhome by going from city to city to buy, renovate and resell houses. Since John Walsh and Angel Eller set out on their RV adventure three years ago, they’ve learned new trades and flipped houses in Baltimore, Maryland, and Jacksonville, Florida.

Eller, who was raised in Anchorage and was into her forties when she made the decision to go on the road, said, “I was just tired of being in Alaska. It’s the biggest state in the Union and you can’t go anywhere. There’s one highway and you’re never going to leave. I just wanted to travel.”

Walsh, an Irishman who made his way from Dublin to Anchorage as a commercial fisherman before he became a full-time handyman, met Eller about seven years ago through local music events. Walsh plays the tenor banjo and performs Irish music, and Eller’s daughter, Cayley, was a step dancer.

Both Eller and Walsh wanted to travel in the Lower 48, but the question was how to do it.

“We needed a way to make money on the road,” Eller said. “John had good handyman skills and I can tear anything apart. We also knew we wanted to stay in a city for a bit of time so we could get to know it, so we came up with the house-flipping idea. Flipping has been a big thing, so we figured if we could make money here and there, we could continue traveling.”

The couple renovated her home in Anchorage and, when that went well, began their traveling adventure by buying a 32-foot Fleetwood Pace Arrow motorhome.

“We spent a lot of time looking for RVs online, especially in Arizona where you can find them a lot cheaper…but most of the newer RVs we looked at were in bad shape,” Walsh said. “We settled on the Fleetwood Pace Arrow because it had a lot less miles on it than the others that were less expensive and it was well looked-after by the owners. Also, we knew we needed a Class A for the storage capacity.”

The 1997 motorhome the couple purchased from a private party in Anchorage had only 43,000 miles on it. Other than installing a futon inside and adding some removable solar panels to help keep the batteries charged, the couple hasn’t made any major renovations on the RV (though Walsh does plan to install permanent solar panels directly on the roof of the vehicle later).

The couple originally planned to make Phoenix their first stop, flying out the year before to check out house-flipping opportunities.

“It was a great market to buy a house, but we later found it wasn’t a good one for selling a house,” Walsh said. “It would have been good if we wanted to hold rental properties, but we didn’t want to go in that direction.” 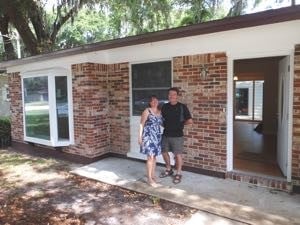 Full-time RVers Angel Eller and John Walsh brought, renovated and sold this Florida house to help pay for their travels.

In August 2012, the couple set out for the East Coast with no real plan in mind.

“I told my daughter when we left Alaska we didn’t know where we were going,” Eller said. “Our plan was not to have a plan. But we did make a list of all the cities where we wanted to visit.”

When they were in Minneapolis, the RV experienced a “little manifold exhaust problem,” so the couple had it repaired and left it in storage—using the opportunity to fly to Europe to visit Walsh’s family. When they returned and hit the road again, they decided on Baltimore.

“John wanted to go there because of the Irish Music scene in the city, and he also knew a ton of people there,” she said.

Before they arrived, they also bought a truck to tow.

“We didn’t have another vehicle when we started out, but after Chicago we realized we need a tow vehicle, which we bought in Maryland,” she said. “We’re glad we did because Baltimore turned out to be the most RV unfriendly place we’ve been so far. There’s only a few places you can park it…they wouldn’t even let us park at Walmart.”

In Baltimore, they purchased their first house to flip—a three-story built in 1929.

The couple spent a year renovating the house, and sold it in January of 2014.
Several months passed before they selected their next destination. They first considered North Port, on the west coast of Florida near Sarasota. But after taking a temporary job as camp hosts at the Juniper Springs Campground in the Ocala National Forest in central Florida (where they received free electric and propane while they considered their options), they changed their focus to Jacksonville, Florida.

They bought a 1,426-foot ranch-style home near the Mayport Naval Base in the Jacksonville suburb of Atlantic Beach for $72,000 in August 2014 and undertook its renovation. “After doing three-floors in Baltimore, including an entire basement renovation, a single floor was really nice,” Walsh said.

They used local contractors for work on the roof, air conditioning and windows. Along with interior improvements, they did a partial renovation to the garage, which needed flooring. When they finished in May of this year, they sold the house for $162,000.

Now a full three years into their RV lifestyle, the biggest issue they’ve had to contend with is maintaining Internet access (so they can keep in touch with their families in Alaska).

After finishing their project in Atlantic Beach, the couple spent the summer doing a variety of things. They traveled to Orlando and took RV roofing classes, and then got an RV roofing job in Huntersville, North Carolina, before heading up to Nashville and then through Kentucky in June. In July, they took part in Irish Arts Week in the Catskills in upstate New York—where Walsh said he “got to play a lot of music”—before visiting Niagara Falls for the first time.

They plan to finish the summer in New Jersey and Maryland, picking up jobs along the way where they can, before they set their sights on their next flip—and the city where it will happen.

“We’ll decide before winter comes, but right now we’re leaning toward Arizona or Texas,” Eller said. “I really wanted to go to Austin, Texas, but I think we may have missed the flipping boat there.”

She said they might pick up some investors along the way, too, which would allow them to renovate and flip homes in the half-million-dollar range.

But, if that doesn’t happen, they are content with what they have…and what they’ve accomplished. 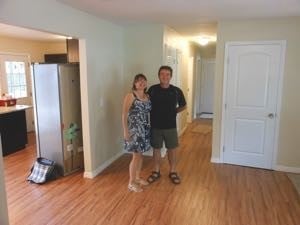 “We really don’t have a plan as to how many homes we’ll renovate,” Walsh said. “I still miss the fishing, but this is a lot more fun. The whole plan is to have a job, enjoy doing it, and get to see a bit of America.”

Ron P. Whittington is a public relations consultant in Jacksonville Beach, Florida, who has worked with the Florida RV Trade Association for five years and is a frequent RVer.  He is also a fiction writer of several thrillers and an ongoing freelance contributor to the Florida Times-Union and Jacksonville Magazine.