You are here: Home / Top Stories / Four Favorite National Monuments
This post may contain affiliate links or mention our own products, please check out our disclosure policy here.

Like a middle child overshadowed by his big brother, national monuments rarely grab the attention or match the attendance of national parks like the Great Smoky Mountains or Grand Canyon. That’s exactly why savvy RV enthusiasts should seek them out. Unspoiled and generally uncrowded, national monuments are worth a stop along the way. As my family has discovered, these gems can even outshine their national park siblings.

President Theodore Roosevelt established the first national monument, Devils Tower in Wyoming, in 1906.  President Bill Clinton used his preservation power the most vigorously by creating 19 monuments and expanding three others during his presidency. President Barack Obama proclaimed the two most recent additions this year, Organ Mountains-Desert Peaks National Monument in New Mexico on May 21, and the San Gabriel Mountains in Southern California on October 10.

Each national monument has its own character and attributes. Here are some RV-accessible monuments that are my family’s favorites and could become yours too: 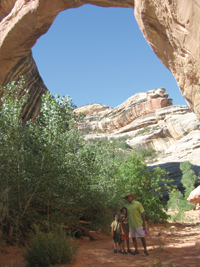 We discovered Natural Bridges National Monument on a drive between two national parks—Canyonlands and Bryce Canyon. Located at the end of Highway 275 in southeastern Utah, it’s home to three spectacular natural bridges—Sipapu, Kachina and Owachomo.

The monument has an 8.6-mile loop that you can hike to view all three bridges. However, our family opted for the trail to Sipapu Bridge. A little over a mile round trip with an elevation gain of 500 feet, this trail has ladders, stairs, switchbacks and a short steep section of slickrock. Its variety delighted my children. Best of all, we never saw a single soul!

And what a payoff at the end! Sipapu is the largest and most stunning of the three bridges. (It’s the second largest natural bridge in the country behind Rainbow Bridge at Lake Powell.) The opening could nearly house the dome of the United States Capitol. Its Native American name means “the place of emergence,” an entryway by which the Hopi believe their ancestors came into this world. The bridge is considered middle-aged, older than Kachina but younger than Owachomo.  Formed thousands of years ago by a river—not wind—Sipapu will someday completely erode and collapse as part of the endless cycle of change. Best to get there before it happens.

There’s a 13-site campground without hookups for vehicles 26 feet and under at the monument. Alternatively, you’ll find a number of commercial campgrounds in nearby Bluff and Monticello.

Located 180 miles west of Grand Teton National Park, Craters of the Moon National Monument and Preserve belongs to another world.

In 1969, Apollo 14 astronauts Alan Shepherd, Edgar Mitchell, Eugene Cernan, and Joe Engle visited the monument for a lesson in volcanic geology as part of their moon mission training. Since only a limited amount of material could be brought back from the moon, it was critical that the astronauts knew enough about geology to select the most scientifically relevant specimens.

Craters of the Moon is made up of approximately 60 lava flows (with examples of both a’a and pahoehoe lava) and 25 cinder cones. After climbing to the top of Inferno Cone, we were rewarded with a spectacular view of the 1,100-square mile preserve, which is roughly the size of Rhode Island.

The monument is best visited in the early or late part of the day to view the subtle color variations in the rocks and cinder cones. You’ll also have a better chance of seeing wildlife, including mule deer and marmots. To fully appreciate this monument, take advantage of the ranger programs. I highly recommend the two-mile Buffalo Caves hike, where you’ll see nearly every type of volcanic activity and vegetation that the monument has to offer. At the halfway point, rangers will lead you into a lava tube for an underground tour. Caves can also be explored on your own.

The Lava Flow Campground at the monument can accommodate a limited number of RVs, but there are no hookups. Alternatively, I’d recommend the Craters of the Moon KOA in nearby Arco. 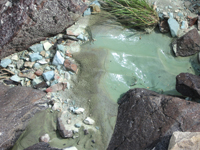 John Day Fossil Beds National Monument consists of three units in Eastern Oregon—Clarno, Painted Hills and Sheep Rock. Visiting all three units in a single day is a difficult task and not recommended.

The Sheep Rock Unit is home to the Thomas Condon Paleontology Center, the best place to see animal and plant fossils from the Age of Mammals over 40 million years ago. After stopping at the visitor center, hike one of the trails to see the blue-green claystones of the Blue Basin. Along the way, my young paleontologists inspected some fossils that had been left in place for all to enjoy and eagerly looked for new discoveries.

The Painted Hills are simply stunning. With changes in light and moisture levels, the hills’ tapestry of red, orange, yellow and green hues weave together a dynamic landscape of indescribable beauty. In the spring and summer months, a vibrant array of wildflowers add to the scene. The trails here are easy and accessible. For the best photographic conditions, plan to visit in late afternoon.

The Clarno Unit is 18 miles west of the town of Fossil and a bit more difficult to reach. The palisades are the most prominent landform. Here, fossils from tiny four-toed horses, rhino-like brontotheres and crocodilians have been unearthed along with an incredibly diverse range of ancient plant life. Clyde Holliday State Recreation Site along the John Day River provides an excellent home base. It has more than 30 campsites with electricity and water. There’s also an on-site dump station. 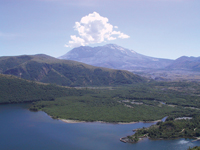 You’ll want to start your visit at the Johnston Ridge Observatory, the visitor center nearest the crater. I’d recommend going straight inside to view the video recounting the events leading up to the eruption on May 18, 1980.  At the end, there’s a big reveal—I don’t want to ruin the surprise! Then venture outside to see the swelling lava dome, currently 920 feet high, that volcanologists continue to monitor on a daily basis.

Now as you drive back down the mountain toward the Science and Learning Center at Coldwater, you’ll be able to fully appreciate the landscape around you, formed by the resulting avalanche and mudslide. The center is an excellent spot for a picnic overlooking the blue waters of Coldwater Lake, and a hike through the meadows of colorful wildflowers.

While Mount St. Helens can be approached from the south and east via winding roads, I’d recommend the western route off Interstate 5 via Route 504 for RVers, especially if you’re short on time. Seaquest State Park offers distant views of the mountain (maximum site length of 50 feet); there are also a wide variety of commercial campgrounds in the area.

Shellie Bailey-Shah is a travel writer and television consumer reporter in Portland, Oregon.  She and her husband, along with her two sons and yellow labrador, aim to visit all the national parks (and national monuments along the way) in their motorhome.  Their current tally:  26.