You are here: Home / Blog / Free Summer Concerts
This post may contain affiliate links or mention our own products, please check out our disclosure policy here. 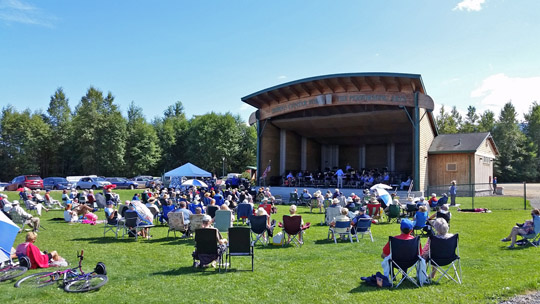 Opportunities abound in Sequim for summer entertainment. Every Tuesday night from May through September, free programs are provided at the James Center for the Performing Arts in Carrie Blake Park and indoor programs are given during the colder months. Their programs consist of Gypsy Jazz, the Stardust Dance Band, Bluegrass and the Navy Band just to name a few.

The first program I attended, I knew to take a chair and water but otherwise, I walked in not knowing what to expect. It turned out to be a karaoke contest. It was still a little warm at 6 p.m. so I asked permission to sit in the shade near the surrounding trees, with another lady who was also taking advantage of the shade. Her companion was a well-groomed and friendly Schnauzer. It was fun getting to know her and learning a little more about Sequim. 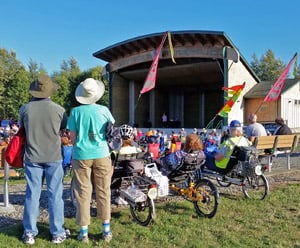 It was a delicious time for families with kids, babies in all stages, well-mannered dogs of all sizes and they all reclined in folding chairs or found places to sit or roll on blankets. Older folks joined in along with bikers, hikers, and skaters. For an area with a reputation for rain, the town is very dry, with very brown grass where it isn’t watered. It was held in the “Water Reuse Demonstration Site” which taken literally means you don’t drink out of the hoses because, well, you just don’t drink out of the hoses. Take my word for it.

On a Sunday afternoon at 3 p.m. just this week, I went to a free concert put on by the combined efforts of the Sequim City Band and The Hometown Band that covers Kitsap County. They declared in the provided program that their members were of “varying skill levels.” According to how they played, I would say their skill levels were very high. How do I know? I don’t. I just know they gave us a couple of hours of delightful music from Chicago, Bye Bye Blackbird, the Stars and Stripes Forever, and selections from Les Miserables.

This one taking place in the middle of an August afternoon, I quickly learned a lesson. In looking over the crowd, you certainly could pick out for sure the ones who came regularly…they wore hats or had umbrellas against the summer sun. Guess I’ll buy a hat with a brim this week because I’m definitely going back for more music. God Bless until next week.