You are here: Home / Columns / On the Road for Good / From Hot to Cold, a Season of Extremes
This post may contain affiliate links or mention our own products, please check out our disclosure policy here. 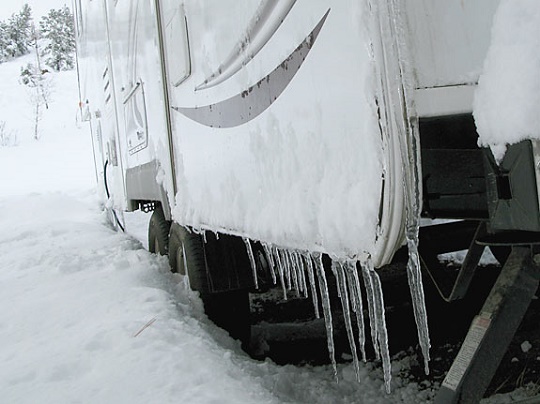 Tonight’s low temperature is plummeting into the 20s – again, and as I sit here with the heater running, waiting for Jim to finish making homemade noodle soup for dinner, it’s hard to believe that we are in Southern California. We pride ourselves on doing our best to avoid winter weather but this year there seems to be no escaping Mother Nature’s wrath, even in the Golden State.

This season’s crazy winter started with a torrential downpour while parked in Las Vegas around Halloween and hasn’t stopped yet. Although there were small breaks of sunshine and higher temperatures that peaked at around 65, we haven’t had the kind of winter that snowbirds like us are used to. I can’t say that I’m surprised though: since Jim and I started full-timing in 2007, everywhere from the Dakotas to Florida, people say “The weather’s just not like it used to be anymore.” Since we aren’t used to being in one place very long, I can’t vouch for that but what I can tell you is that full-timers like us are going to see a lot more wild weather caused by climate change, and we’d better get used to it by being prepared.

During the last few months we’ve learned a few new things about staying comfortable (and calm) in all sorts of crazy weather. These things might seem second nature to RVers who’ve been doing it all their lives, but to us, it’s all new. Funny how that even after all this time on the road we are still learning and especially when we’re camped off-grid. Some of the lessons we’ve learned this winter include: 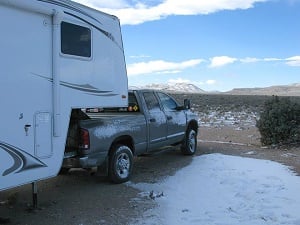 Always empty the water lines on cold nights. One morning after what was probably the coldest night we’ve ever spent boondocking in our four season rig, we awoke to find that slush had formed inside our plumbing lines. Since we were camped in the middle of nowhere at least an hour from any services, we were incredibly fortunate that nothing burst. Our rugged Arctic Fox design came through yet again, but now we have a rule that the last person who goes to bed is responsible for turning off the water pump and draining the lines.

Bring in the slide when it’s extremely windy. We’ve had windy days before but nothing like the ones that have been happening this winter. While camped on BLM land near Joshua Tree National Park, winds were gusting at about 40 miles an hour for two days straight. Since we always point our rig west to give our solar power system as much sunlight as possible (which is especially important during winter’s short days), the winds were broadsiding us all afternoon. We never bring in the slide because it doesn’t have an awning topper, but that night it occurred to that retracting it might make us steadier in the wind. What a difference that made! Not having that extra surface area for the wind to play with made things more tolerable, if a little squished inside the rig. Between that and a good pair of earplugs we managed to get some sleep.

If you’re going solar, invest in a robust system. I’ll admit it: we cheaped out on our last solar power system to save money. It never had enough power to allow us to feel like we were living “normal” lives. That system couldn’t do things like run the furnace after dark, or even a vacuum during the sunniest days. Since we upgraded to a slightly larger rig with a significantly more robust system, we are so comfortable we hardly feel like we’re off-grid. We can do everything from run the satellite Internet system to the microwave to power tools and keep the heater on at night. Paying for the bigger system hurt, but it’s worth every penny to be comfortable. 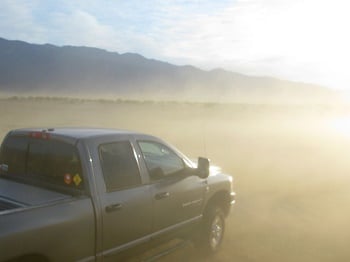 Stay hitched up if you can. We’re often lazy about unhitching when we get to a spot and are pretty sure we’re not going anywhere for a while. This season we learned that when we’re boondocking in typically windy areas, it pays not to unhitch. By keeping our Dodge connected to our fifth wheel, the rig has another anchor point and extra weight to keep it steady during high winds. That’s especially nice at night when we’re trying to sleep.

Follow the weather but don’t count on it. Daily weather forecasts have never been so in flux. After waking up to one too many forecasts that changed from the day before, I realized that no matter what Weather.com says, things can always change by morning. While it’s smart to keep an eye on conditions, it makes life more tolerable if you don’t plan your entire life around good weather that’s supposedly just around the bend.

Get as much information as you can about where you’re going to camp. We learned this lesson a couple of years ago but it’s worth repeating here. Two winters ago while camped in a remote backcountry campsite at Big Bend National Park, it rained one night. We hitched up and pointed the rig toward the road in case the rain got worse and we needed to make a run for it. Thankfully we didn’t, but the next day when I told a park ranger where we were camped he said “Oh good thing it didn’t rain harder, that road you were on gets washed out all the time, you’re lucky you didn’t get stuck!” Now we know that scouting out a boondocking spot in the toad, without the trailer, is smart but it’s not enough: these days we thoroughly research the terrain by inquiring with locals before heading out.

The final lesson? Stay flexible. So many aspects about full-time RVing require you to remain flexible if you want to enjoy it. If you move your home around more than a few times a season, it’s imperative that you have a good attitude about all kinds of weather, from rain to wind and yes, even snow! For example, in November we had no idea that the cold night we spent in Nevada would catapult us into a winter wonderland for a few days, but we just made the most of it. We had food, water and plenty of propane so we were set. Life is good when you are prepared and ready to adapt to changing weather conditions on the road.

Rene Agredano and her husband Jim Nelson are full-time RVers who live and work from all over the U.S. They chronicle their road life at LiveWorkDream.com.