You are here: Home / Top Stories / Can Low Fuel Costs for RVers Continue?
This post may contain affiliate links or mention our own products, please check out our disclosure policy here.

It wasn’t long ago when RVers shed tears at the pump as gas prices climbed to astronomical prices. But nobody’s crying now as fuel costs for RVers bottomed out to historic lows. As we roll into the fall and year’s end, everyone wants to know: can summer’s historic fuel costs for RVers hold steady? 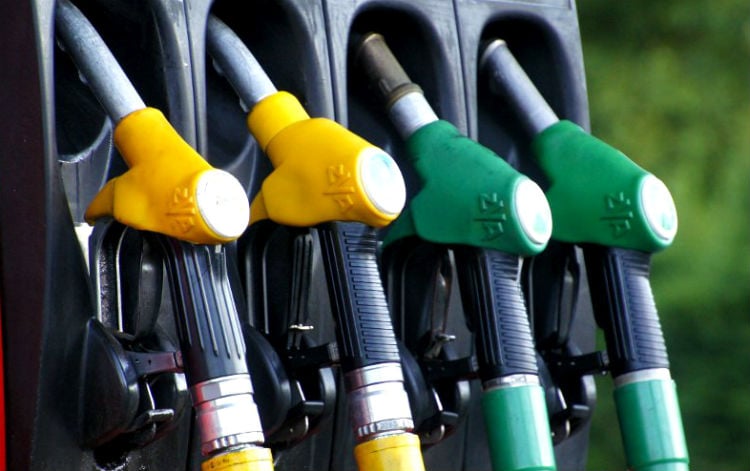 Gas prices will hold steady around $2.26 a gallon into 2017. The cheapest fuel for RVers will be along the Gulf and in the Southeast, according to Sean Hill, an EIA analyst.

This season we’re saving more at the pump than ever before, according to the Federal Highway Administration (FHA). A glut of crude oil in the global marketplace has pushed fuel prices down to record lows. The overstock is a mixed blessing: thousands of oil industry workers are unemployed, but now RVers can fuel up without fear.

American drivers are currently paying an average of $2.70 per gallon – that’s .44 cents less per gallon than last summer, according to the U.S. Energy Information Administration (EIA). The savings put us on the road  in record numbers. During the first half of this year we tacked on more than 280 billion miles onto vehicle odometers. That’s a three percent increase over last year. In a few weeks when the FHA releases August driving figures, expect to see even more record-breaking driving statistics.

For some perspective, here’s a rundown of fuel costs for RVers through the years, according to the experts at GasBuddy.com: 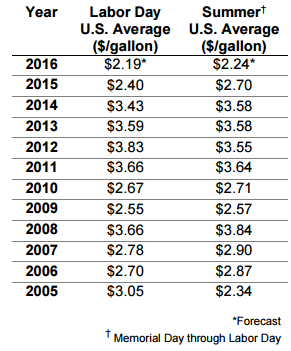 RVers are reveling in the good times by ditching their smaller RVs for bigger, new ones. In July, the Recreational Vehicle Industry Association of America (RVIA) revealed that motorhomes are now the largest share of new RV purchases. More than 28,771 motorhomes were sold in July, an increase of 4,057 units from July 2015.

But whether we’re driving a new motorhome or a beloved vintage trailer, low prices at the pump encourage us to consume epic amounts of fossil fuels.

Experts say that for the last three years, we’ve consumed so much more petroleum that annual U.S. oil consumption is now within six percent of the all-time high that America set in 2005. With just 121 days left in the year, the big question remains: how long can the good times last?

Where to Fly South for Cheap Winter Fuel

Gas prices will hold steady around $2.26 a gallon into 2017. The cheapest fuel for RVers will be along the Gulf and in the Southeast, according to Sean Hill, an EIA analyst. Snowbirds who head to the Southwest can expect to pay more than any other place in the U.S.

“Much of gasoline consumed on the East Coast is produced in the Gulf, so being close to the source allows consumers in that region to enjoy the lowest retail prices more often than not,” says Hill. “On the flip side, prices are usually the highest on the West Coast, as that market is somewhat isolated and self-sufficient in producing its gasoline, and also is subject to higher taxes and more strict environmental standards compared to other parts of the country. California specifically.”

Diesel fuel prices are also expected to remain low in the next few months. But as diesel-powered RVers steer into 2017, they can expect to pay higher prices than their gas-powered counterparts. Diesel prices always go up when the temperature drops and home heating demand surges.

The good news is that there are many more weeks of great camping weather and low fuel costs for RVers.