You are here: Home / Departments / RV Books / Ghost Towns of the Pacific Northwest 2013
This post may contain affiliate links or mention our own products, please check out our disclosure policy here. 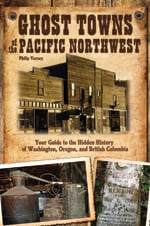 If you share author Philip Varney’s fascination with ghost towns, you will find this volume a big help in planning your explorations in Washington, Oregon and British Columbia. This is Varney’s eighth ghost town guidebook, and it’s hard to imagine anyone doing them better.

Varney focuses on 54 ghost towns in the Pacific Northwest, providing history and a description of what you will find there today. He visited all the towns in 2010 and 2011 and took photos with a digital camera.  He didn’t use a flash or tripod, and although the photos are very good, Varney says he tried to take the kind of photos any person with a camera could take.

Varney’s definition of a ghost town is a place where the population has decreased significantly, and the initial reason for its settlement, such as mining or logging, no longer keeps people there. He has excluded from the book places where there isn’t much left to see.

The book organizes the ghost towns by area to make it easy to plan a tour. Some of the towns are deserted; others are greatly diminished, and some, like Roslyn, Washington, have become charming. Roslyn was a center of coal production in the first decades of the last century but is better known now for its appearance as Cicely, Alaska, in the 1990s television series, “Northern Exposure.” Less than two miles from Roslyn is Ronald, another town that grew with the coal mines and is now a shadow of its former self.

Ghost Towns of the Pacific Northwest has 224 pages and is published by Voyageur Press. The cover price is $24.99.