You are here: Home / Blog / Girls’ Get-Away to Showboat Branson Belle
This post may contain affiliate links or mention our own products, please check out our disclosure policy here. 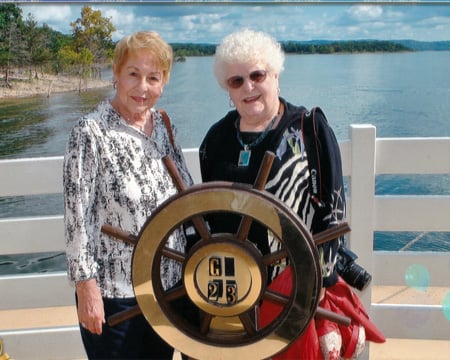 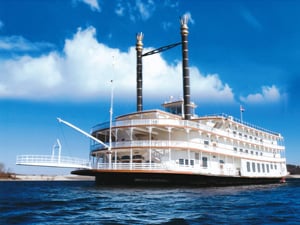 Showboat Branson Belle in Branson, Missouri, celebrates 20 years of entertaining folks with dinner cruises on the pristine waters of Table Rock Lake in the Ozark Mountains. Charlene Payton and I celebrate 30 years of friendship formed in Branson at our membership RV resort, Treasure Lake. So a girls get-away aboard the Showboat Branson Belle seemed fitting. After all, we had watched together the construction of the elegant reproduction of an 1880s-styled paddlewheeler in its own shipyard on the shores of Table Rock Lake. Almost the length of a football field, the Showboat Branson Belle is believed to be the largest ship built on an American land-locked lake.

I have reviewed numerous shows headlining the stage of the elegant tiered theatre inside the boat—shows ranging from an original production with a theme similar to “Seven Brides for Seven Brothers,” to “Cajun Connection” and, more recently various variety shows. I’ve been served delicious dinners, freshly prepared in the boat’s own galley. Our experience as a ladies night out was no exception for delicious food and high energy entertainment.

The new show for 2015, aptly named “Celebrate,” crowns 20 years of live entertainment aboard the lavishly appointed Showboat Branson Belle. Christopher James, the headlining comedy-magic act and emcee, keeps the show at a fast pace for a wide range of audiences from young families to senior adults to high school students celebrating a prom. His unique improvisational style adapts instantly to the audience as he involves different people in his act. He mixes astounding magic into his constant banter and interaction with those seated in the boat’s theatre, creating spontaneous lines for each of his two shows daily, six days a week. Yet his magic has no big boxes, no rabbits or pigeons pulled from a hat, and no assistants cut in half. Christopher is first, a comedian. He works in situational comedy and the result is fresh, clever, and well, just plain funny. 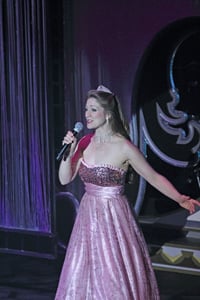 Vocalist Cassandré Faimon-Haygood, who made a name for herself with for her role for many years in the classic Dickens “A Christmas Carol” at Silver Dollar City, and then with her own Branson show, “Cassandré,” highlights the show with her powerful and versatile renditions of songs such as “Somewhere Over the Rainbow” and “Phantom of the Opera.” Her costume changes from princess ball gowns to a Mary Poppins coat and hat keep the audience engaged. 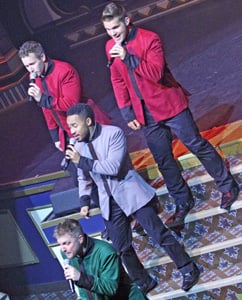 Two groups of young men own the stage with rich harmony and rhythmic choreography. The Showmen, a returning group of five men, bring the Beatles, Mo-Town, and movie classics to the mix of music. A new four-man dance troupe called “Rhythm” claim to be the fastest feet west of the Mississippi. Their clogging backs up that claim. Yet, they also combine with the entire cast to create a singular flow to the pace of the show. And the men’s costume changes equal those of Cassandré as they change from English-style no collar suits in imitation of the Beatles to elegant white suits that speak formal elegance. Accompanying the cast and providing dinner music, the Rockin’ Dockers form the show’s musical backbone with superb instrumental talent. 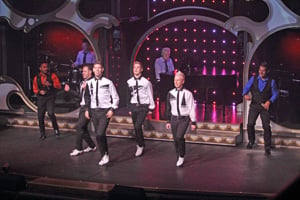 A professional production that awes, entertains, and inspires, “Celebrate” is the anchor of a Showboat experience. But the food and the service of the wait staff weighs in mightily to create a memory for Showboat Branson Belle’s guests. And last, but certainly not least, especially for two ladies who need a little help from their friends, the courtesy of the staff in helping guests get from the boat to the parking lot completes a perfect get-away evening.