You are here: Home / Top Stories / Going to the Top of Texas
This post may contain affiliate links or mention our own products, please check out our disclosure policy here. 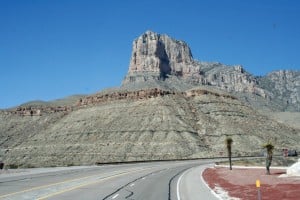 Driving east from El Paso, Texas, on U.S. Highway 62/180, the scenery framed in our windshield looked brown, barren, and well…desolate. With a ho-hum nod, we passed crusty salt flats, bare creosote bushes, and dusty desert land dotted with cactus. And then, El Capitan in the Guadalupe Mountains appeared in the distance, raising its stark chiseled face against a bright blue sky. Colors changed from slate to pale pink as sunshine cast golden rays on the massive peak. As we climbed Guadalupe Pass, the natural treasures inside Guadalupe Mountains National Park remained hidden behind earth-colored mounds of mountains. Yet with a deeper look, we discovered pine and hardwood trees, springs and ponds, switchback trails, and meadows of grass. We also found a stream of human history dating back thousands of years.

The area’s earliest inhabitants were hunter-gathers who followed game and ripening vegetation. They lived in caves and crannies common throughout the mountain range. Archaeologists have documented their presence from scattered arrowheads, baskets, pottery, and symbols etched on rock walls. Spaniards crossed the area in the 1500s, but left little behind except the introduction of horses to the nomadic Apaches. The Spaniards gave the natives their Spanish name Mescalero because of the agave (or mescal) they gathered for food and fiber. Agave roasting pits and other remains of Mescalero campsites are common today in the park. Prior to the 1800s, the Guadalupe Mountains and the surrounding desert plains remained their uncontested homeland. 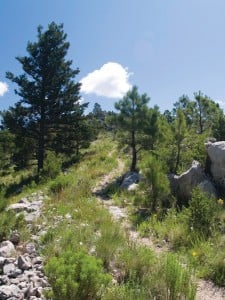 However, by the 1850s, explorers trooped through the Guadalupes looking for transportation routes to western America—even a possible course for a transcontinental railroad. In 1858, a horse-changing station called the Pinery was established near Pine Springs to accommodate the Butterfield Overland Mail Stage. With abundant water from Pine Springs and good grazing, the isolated station became one of the most favorably situated stops on the original 2,800-mile Butterfield route. The Pinery was also the highest station on the route, almost at the top of Texas. To protect the interests of the stage line, several cavalry troops were ordered into the area. Bloody conflicts between Mescalero Apaches and Buffalo Soldiers marked the trails and meadows. After only eleven months, the Butterfield stage route through the Guadalupe Mountains was dropped for a safer and less rugged course along a string of military forts to the south.

Today, the aroma of venison and baked beans that once awaited weary travelers can only be imagined at the remains of the old stagecoach station, a quarter-mile from the Pine Springs Visitor Center. The ruin is fragile, a mere ghost of its past limestone fortress-styled walls. In its heyday, the stage stop had a wagon repair shop, a blacksmith, and stables for the replacement teams of fresh horses. Three mud-roofed rooms warmed by a double fireplace were a welcome respite for tired travelers.

A once bustling place, Pinery Station housed the station keeper and six to eight men who worked as cooks, blacksmiths and herders. The mail coach with as many as nine passengers came through four times a week. Express riders dashed through at all hours day and night. Road crews with tank wagons rolled over the jolting trail to fill up with fresh water from Pine Springs. Freighters, drovers, soldiers, mule pack trains—even outlaws and renegades—added to the traffic long after the Butterfield Mail Stage changed its route. 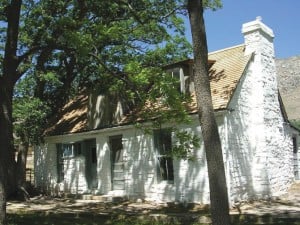 Permanent settlements in the Guadalupe Mountains were uncommon even after the final displacement of the Mescalero Apaches. But rancher Felix McKittrick worked cattle there in the 1870s, and gave his name to McKittrick Canyon, which is visited today by thousands who enjoy its hidden beauty and splash of color. However, the canyon is open to the public due to the generosity of Wallace Pratt, who discovered the canyon as a geologist for Humble Oil Company.

On his first trip, accompanied by two oil-lease brokers to look over the land, Pratt expressed the same feelings I had traveling Highway 62/180, seeing only the bleak desert scrub of West Texas. But then he entered the hidden woodland deep within McKittrick Canyon’s walls. Maple, walnut, oak, and a smattering of evergreen grew alongside desert cactus and agave. Recognizing the uniqueness of the steep walls and the stream that ran through it, Pratt declared the canyon, “…the most beautiful spot in Texas.” He acquired an interest in the land and had a getaway cabin built for his family. After many summers of relaxation in the canyon, he and his family donated the land, including the stone cabin and a permanent retirement residence outside the canyon, to the National Park Service in 1960. Although the stream went underground during flooding in 1943 and 1968, McKittrick Canyon remains a favorite hiking destination within the park. The trail, considered moderate, is level, but rocky. A 4.8-mile round trip reaches Pratt’s Cabin. The Grotto is a mile farther, adding two more miles to the round trip.

The first permanent ranch house within today’s national park boundaries was constructed in 1876 by the Rader brothers. Now called Frijole Ranch, it housed several families over the years. As the only major building complex in the region for several decades, the ranch house served as a community center and regional post office from 1916-1942. Today, the Frijole Ranch House has been restored and operates as a cultural museum.  Trails lead to nearby springs.

To reach the “Top of Texas” at 8,751 feet, take the Guadalupe Peak Trail. A distance of 8.4 miles, the trail affords spectacular views, but also covers a steep and rocky path. The hike is rated strenuous.

Guadalupe Mountains National Park is a gem in the desert of West Texas—a surprise for folks who love hiking, backpacking, and birding and a jewel for those whose imaginations soar with historical stories of settlers, explorers, and men and women who traveled the Butterfield Trail.

Arline Smith is the author of five books and numerous magazine articles. She and her husband, Lee Smith, a photographer, live in Heber Springs, Arkansas. You can follow Arline’s blog, “RV Travel Tales” at rvlife.com.

Guadalupe Mountains National Park is 110 miles east of El Paso on U.S. Highway 62/180. The place to begin a visit is the Pine Springs Visitor Center, which has maps, brochures, an informative orientation slide show, interpretive exhibits, a bookstore, weather information, and a knowledgeable staff.

The trail to the Pinery Station ruins is paved, rated an easy walk and is wheelchair accessible. This is the only trail that permits pets, and they must be on a leash.

Frijole Ranch is only a quarter of a mile down the Manzanita Spring Trail. The path is easy and wheelchair accessible. A small pond draws wildlife that can often be viewed. Frijole Ranch also has water and picnic tables under large shade trees.

There are no paved roads for touring the park, but there are access roads to trailheads and the visitor center, Pine Springs Campground, McKittrick Canyon Contact Station, Frijole Ranch and Dog Canyon. There is a road to Williams Ranch, which was built in 1908 below the steep western slopes, but it requires a four-wheel drive vehicle. The park has 80 miles of trails.

Pine Springs Campground has 20 tent sites and 19 RV sites. The RV camping area is a paved parking lot that can accommodate RVs up to 40 feet in length.  The campground has water, flush-toilet restrooms and utility sinks, but no showers or dump station. Camping is first-come, first-served. The park also has group camping areas, requiring reservations. For park information, visit nps.gov/gumo.

Restaurants, a service station, convenience store, overnight lodging and a campground with amenities are available 35 miles east of the park in White’s City, New Mexico.