You are here: Home / Blog / Golf Boarding: A New Way to Play the Game of Golf
This post may contain affiliate links or mention our own products, please check out our disclosure policy here. 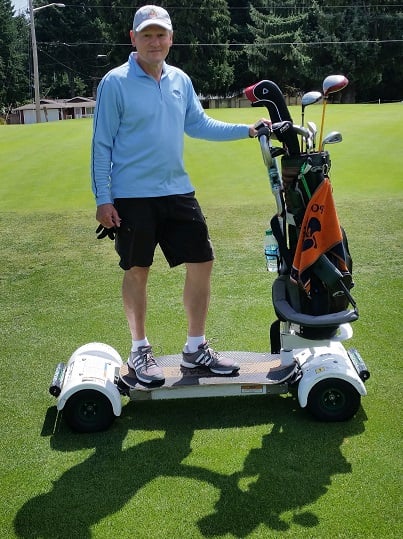 Seen here is the Golfboard, which was honored as the Best New Product at the PGA Merchandise Show’s in 2014.

Golf boarding offers a unique way of experiencing a round of golf. Selected as the PGA Merchandise Show’s Best New Product of 2014 – the Golfboard is similar to a snowboard, small surf board on wheels, or motorized skate board. I tried the Golfboard recently at Capitol City Golf Club in Olympia, WA. The experience was phenomenal! Here’s what I discovered.

A quick tutorial from pro shop manager Matt Gagnon, I was familiar with the on-off switch, forward and reverse options, as well as how to turn the board. On the way to the first tee box, I took a few extra laps around the practice area to get used to leaning into a turn. Shifting your weight from side to side is how your turn the Golfboard. After a hole or two, it’s like second nature.

Capitol City General Manager Steve McNelly shared his summary about the Golfboard’s appeal, since acquiring four boards a year ago.

“I think the only obstacle we have with the boards is fear and therefore hesitancy to ride them. They look intimidating and people feel they will not be able to stay on or steer the boards. From conversations with first-time riders, it just takes a hole or two to get the hang of it. By the end of the round, they wish they could go faster. If people are physically able, they should give its a try. It’s truly a new golf experience.”

Indeed it is. Flying down the fairway at a top speed of 12 miles an hour doesn’t seem exorbitant. However, Golfboard developers report that the average time of a round of golf is 2 hours, 37 minutes. I can definitely see how it would speed up play, especially with your clubs directly in front of you. As you approach your ball, you can visually determine what club you’ll need. Park the Golfboard a few feet from your ball, and you’re ready to swing.

I noticed while riding the Golfboard, I received numerous stares from fellow golfers. With only four boards in their arsenal, Capitol City isn’t overwhelmed with demand for the boards, but they are rented on a regular basis. To rent, Golfboards are $25 for 18 holes, or $15 for 9. In comparison, a cart goes for $15 per rider for 18 or $9 for 9.

“Every user I have talked to just love the boards,” says McNelly. “ It’s a different golf experience than they’ve ever had before, and whether or not they play well seems to be a footnote because they’ve had so much fun riding the boards.”