You are here: Home / Columns / RV Golfer / The Florida Historic Golf Trail Includes Over 50 Courses
This post may contain affiliate links or mention our own products, please check out our disclosure policy here.

Three years ago, the Florida Department of State launched the Florida Historic Golf Trail in an effort to showcase some of the finest tracks in the country which were built in the Sunshine State. 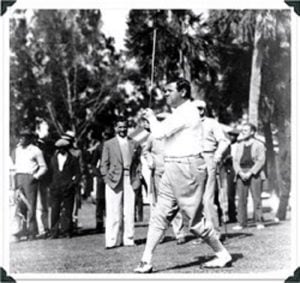 The Florida Historic Golf Trail celebrates Florida’s early golf heritage from the 1890s through World War II, by featuring historic, publicly-accessible golf courses that can still be played on today.

The trail encompasses more than 50 quality golf courses, many of which were constructed in the 1920s and 1930s, an era dubbed by historians as the Golden Age of golf course architecture.

The Florida Historic Golf Trail stretches from Pensacola on the Florida panhandle to the far reaches of Key West. Many renowned architects shared their talents in designing courses throughout the state. A few of those architects included Donald Ross, Seth Raynor, Tom Bendelow, and Herbert Strong.

The Sunshine State boasts nearly 1,300 golf facilities, which makes those tabbed for inclusion in the Florida Historic Golf Trail very special courses. Most of the courses have either retained much of their original character, or have been modified somewhat over the years.

During World War II, one of the courses was sold, and in 2007, course architect Brian Silva completed a comprehensive restoration of the original track.

Working from original routing plans, aerial photos, and Donald Ross’ notes, Silva recreated the authenticity of the 1926 layout. Most impressive are the bunkers. Silva identified long-abandoned or grassed-over bunkers, and excavated them to their original depth.

Many RV parks to choose from

With an estimated 400+ RV parks in Florida, chances are there’s a resort or two near all of the courses on the Florida Historic Golf Trail. Dunedin, a town just north of Clearwater on the Gulf Coast, is home to Dunedin Golf Club and Dunedin RV Resort & The Blue Moon Inn. 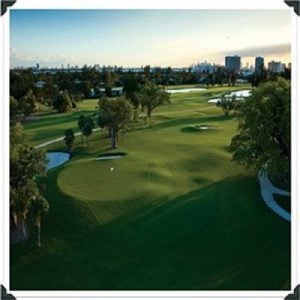 The name Dunedin comes from Dùn Èideann, the Scottish Gaelic name for Edinburgh, the capital of Scotland. Many of the town’s 40,000 residents are of Scottish descent.

The greens, tees, and bunkers were rebuilt to the specifications of Ross’ original design. In 2014, the course became the third golf course in Florida to be listed on the National Register of Historic Places.

A few miles from the golf club is Dunedin RV Resort & The Blue Moon Inn. This popular pet-friendly facility features 233 spacious sites and a large clubhouse for rallies or other functions. Amenities include free Internet, full hook ups with 30/50 amp electrical, pull-throughs, big rig access, and lots of other amenities and attractions.

Dunedin is also home to several beaches, including Dunedin Causeway, Honeymoon Island, and Caladesi Island State Park, which is consistently rated among the best beaches in the world.

A nearby attraction is the Big Cat Rescue Sanctuary. Here you’ll see more than a hundred exotic and endangered “cats” of all types and sizes in the 55-acre sanctuary.

The Dali Museum is worth a visit, especially for art lovers. This impressive collection features the many works of Salvador Dali, and covers the artist’s career. It is showcased through taped guides or with docent-guided tours.

Up in the Florida panhandle, RVers will appreciate Fred Gannon Rocky Bayou State Park in the town of Niceville. The park features 38 spaces, but most of them feel like you’re camping in your own little world. The park offers lots of amenities including full hook ups, showers, 30/50 amp electrical, walking trails, beach access, and boat launches. 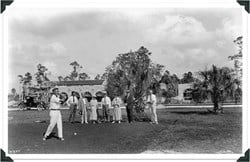 Granada Golf Course in the 1920s

Nearby is another course on the Florida Historic Golf Trail–Eglin Golf Course. Owned and operated by the U.S. Air Force, Eglin Golf Course has two championship golf courses, the Eagle and the Falcon. The Eagle course was constructed in 1923, while the Falcon’s first nine opened in 1960. The second nine was added nearly three decades later. Today, both golf courses are very playable for all skill levels.

A person could spend years exploring all the golf courses and RV parks in the Sunshine State. To find out more about the venerable courses in Florida visit the Florida Historic Golf Trail web site.

Rick Stedman is an avid golfer, RVer, and writer who lives in Olympia, Washington. Rick writes a weekly golf blog, The 19th Hole for RV Life. You can reach him at rstedman@gmail.com.