You are here: Home / Blog / How To Stay Safe From Lightning While You’re On The Golf Course
This post may contain affiliate links or mention our own products, please check out our disclosure policy here. 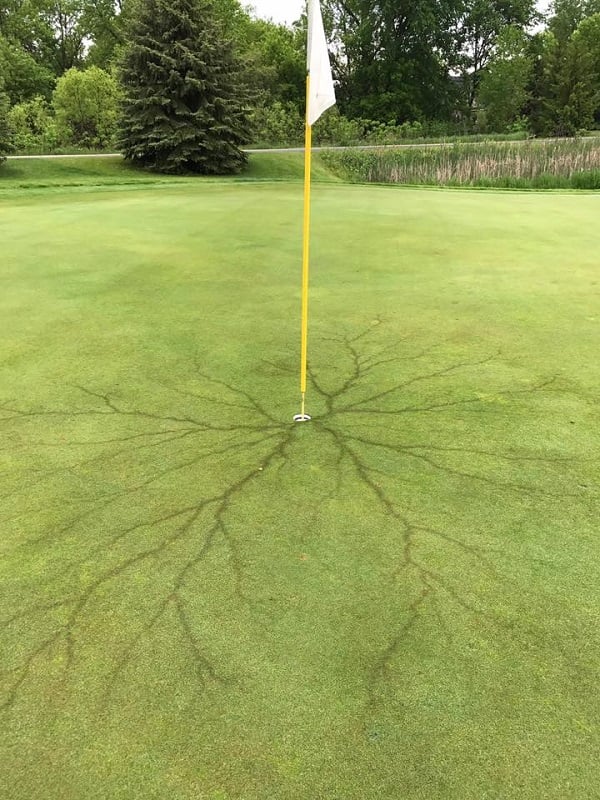 A golfer in England died of cardiac arrest earlier this spring after he was struck by a bolt of lightning while clutching a golf club. A few weeks prior, a Minnesota golf course putting green was completely redesigned after a lightning bolt made a direct hit on a flag stick – the unlucky 13th hole no less.

These examples of lightning’s potential devastation should scare every golfer right off the course when thunder is heard. The flash-to-bang theory is a good rule of thumb to remember. According to the Emergency Medical Services Authority, this is the accepted method for estimating the distance of an approaching thunderstorm. The flash-to-bang theory measures the time from when you see lightning to the time you hear the associated thunder. A measure of five seconds from flash-to-bang means lightning is one mile away. Ten seconds equals two miles; 15 seconds equals three miles, etc. When the flash-to-bang count is 30 seconds or less, it’s time to seek safe shelter.

The National Weather Service recorded 39 lightning casualties in the U.S. in 2016, while to date in 2017 there have been just three deaths caused by lightning. Four percent of all lightning deaths occur on a golf course.

Though your chance of dying from a lightning strike is one in 600,000, there’s no need to tempt the gods. Safety is the first concern on a golf course. In fact, golf is the only sport that offers regulations related to lightning. The United States Golf Association Rule 6-8 allows players to discontinue play if they believe there is a danger from lightning. The USGA also makes available stickers and posters to inform players about lightning safety tips.

Lightning Myths and Facts from the National Weather Service:

Myth: If it’s not raining or there aren’t any clouds overhead, you’re safe from lightning.
Fact: Lightning often strikes several miles from the center of a thunderstorm, far outside the rain or thunderstorm cloud. In fact, “bolts from the blue” can strike as far as 25 miles out from the parent thunderstorm. That’s why it’s important to seek shelter at the first indication of a thunderstorm and stay there until 30 minutes after the last clap of thunder.

• When you hear thunder, lightning is near!

• If sudden close-in lightning doesn’t permit immediate evacuation to a safer place, spread out from your group at least 15 feet apart, squat down, tuck your head, and cover your ears. Head for safety once immediate dangers have ceased.