There are lots of reasons to visit the island nation of New Zealand, including golf, RVing and wine tasting. Kind of sounds a lot like the U.S., only with a British accent. Located about 900 miles east of Australia across the Tasman Sea, New Zealand is actually split in two: the North Island and South Island. The entire country is about the size of California, but with only about 4.3 million residents.

With more than 400 courses throughout New Zealand, golf is certainly a huge draw. Ironically, an American—Julian Robertson—owns two of the top courses in the country: Kauri Cliffs and Cape Kidnappers. Both are ranked among the top 100 courses in the world, which tells you how spectacular they are. Kauri Cliffs, with 15 of its holes overlooking the Bay of Islands, has been compared to Pebble Beach.

Another unique course is Paraparaumu Beach Golf Club. “Pram,” as it’s affectionately called, has long been regarded by many as the spiritual home of New Zealand golf, and considered one of the best links courses in the Southern Hemisphere. Simply put, Pram is golf at its purest.

With all the courses to experience in New Zealand, one in particular stands out from the rest: Royal Wellington Golf Club in Heretaunga, a suburb of New Zealand’s capital, Wellington. The course truly lives up to its name as a royal golf club. The semi-private Royal Wellington is one of the country’s top draws. Since opening in 1895, it has hosted several New Zealand Opens, but its most prized accomplishment was being elevated to “Royal” status.

When the 250th anniversary of the formation of the Royal and Ancient Golf Club of St. Andrews was celebrated in 2004, it was decided that a new “Royal” club would be created.  Up to that point, only 60 clubs had been given the honor, and Queen Elizabeth II had granted Royal status to only one, Troon in Scotland, which earned the designation in its centenary year of 1978. On June 10, 2004, with about a thousand attendees at a dinner celebration, Prince Andrew made it official, sharing that the queen had given her blessing for the Wellington Golf Club to add the word “Royal” to its name.

Measuring 6,831 yards, the par 72 Royal Wellington is situated on a parkland site adjacent to the Hutt River. The fairways are lined with some of the oldest trees in the country, some dating back 300 years, including majestic redwoods, cottonwoods and oaks. The 18-hole championship course is a demanding test for golfers of all skill levels. Club officials are currently developing nine new championship holes, after which they will redevelop the existing 18-hole course.

The No. 5 hole is considered the most difficult on the course. Measuring only 412 yards from the championship tee box, it requires a right to left tee shot to keep the ball from running into the trees. The dogleg left is protected by a large totara tree on the corner and by water all the way down the left side. After you negotiate the tee shot, the long iron approach must be played around a massive bunker on the right side of the green.

The par 5, 545-yard finishing hole is perhaps the most strategic of any on the course. Three bunkers are staggered down the fairway and make the distance of the shot more important than the line. Trying to carry the bunkers rather than play around them will often result in a bogey or worse. Play the hole carefully and in three shots, and a relatively easy par or even birdie is possible. But regardless of your score, the sight of the clubhouse in the backdrop beckons all golfers to enjoy the hospitality waiting at the 19th hole!

A final note to visitors: This is a royal golf course, and as such, it has certain standards and requirements. Cellphones are not allowed in the clubhouse or on the course! There’s also a modified dress code for the course and clubhouse. Photos depicting what’s acceptable and what’s not are posted on the website at rwgc.co.nz. Adhering to a few rules is certainly worth the effort in order to experience such a fabulous golf course as the Royal Wellington Golf Club.

• Any course can call itself royal, but only those blessed by the king or queen of England are truly royal golf clubs.
• In April 2011, New Zealand’s second golf course received royal status: The Royal Auckland Golf Club.
• There are 70 royal golf clubs, most formed during the days of the British Empire. They can be found in Australia, Canada, England, Ireland, India, Scotland, New Zealand, South Africa, China, Sri Lanka, Wales, Zimbabwe, Kenya, Malta, Singapore and the Czech Republic.

In addition to golf, another New Zealand highlight is its spectacular wine growing. New Zealand’s wine industry involves nearly 700 wineries, of which the majority are small boutique family-owned vineyards. The country’s wine-growing regions are found between latitudes 34 and 47 degrees south and cover a distance of 1,000 miles. International critics rate New Zealand Sauvignon Blanc as the world’s best, while doling out high praise also for its Pinot Noir, Chardonnay, Cabernet-Merlot blends, and aromatics.

Many visitors experience New Zealand while roaming the country in a recreational vehicle. Like the U.S. and Canada, RVing in New Zealand offers plenty of spectacular options, and unforgettable memories. For more details, visit newzealand.com.

Rick Stedman is an avid golfer, RVer, and writer who lives in Yakima, Washington. Rick writes a weekly golf blog, “The 19th Hole,” which is published every Saturday at rvlife.com. He can be reached at rstedman@gmail.com. This column is from the May 2012 issue of RV Life. 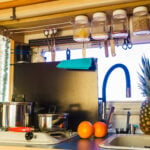