You are here: Home / RV News / Good Samaritan RVers Save Dog from Burning Rig
This post may contain affiliate links or mention our own products, please check out our disclosure policy here.

RVers have a reputation for being the friendliest people you’ll ever meet and a recent act of heroism proves it yet again.

What would you do if you saw this? 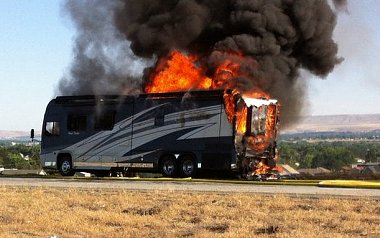 On November 7 iRV2 Senior Member David Bott chimed into the iRV2 Discussion Forums to let us know about a fire (not the one pictured above) that had broken out in a neighbor’s rig at a RV park. The owner of the burning rig wasn’t home at the time, so when flames erupted David and his neighbors did what they had to do.

In his “Outside Our Bubble” blog he writes;

“It is totally amazing to say the least how things can change and “life happens”. One minute you are chatting with a friend you have not seen in some time, and the next you are side by side fighting an RV fire along with two other RV’ers.

The RV owner was not home at the time and we knew a dog was inside.”

If you’ve ever been involved in a tragedy like a RV accident or fire, you know how quick thinking and a never-give-up approach can mean the difference between life and death. In this case it was the near-death situation for the dog trapped in the burning RV. 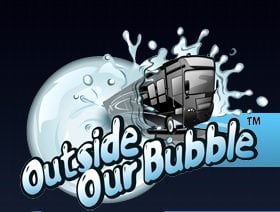 David goes on to say:

“What totally amazed us was, as you will see, all of this time passed and yet, somehow, someway, we saved that dog even though it did not seem likely. We keep asking ourselves, how? How did he make it? With the heat, the toxic smoke, and the large amount of time, one would surely have thought the worst. And we did. But alas it goes to show you…DO NOT GIVE UP. Have Hope!”

The owner of the rig was a full-timer who lost everything but his beloved dog, Zoey. David says “Three chemical extinguishers and three foam extinguishers along with two garden hoses were used to knock down the fire and keep it at bay until the fire department arrived.”

Fire officials suspect that the blaze was ignited by a defective Norcold refrigerator.

Apparently David is no stranger to RV fires; he says it was the second one in four years that’s helped to extinguish! Even more amazing, David captured this fire on vide; all 16 minutes of the entire incident were recorded on his BlackVue DR650GW-2CH dash camera. He turned the footage into a video which we share with you today.

Be sure to check out this iRV2 Discussion Forum topic, “34 RV Fire Facts That Can Save Your Life.”

“We had Mac the Fire Guy at the 09 Nat’l Rally. Superb demonstration on just how soon a fire can get out of hand & what we can & can’t do if we’re ever faced with the situation.” — NLOVNIT 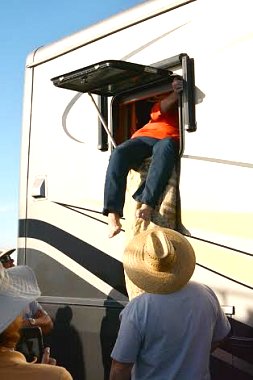