You are here: Home / Blog / Great Escapes: Biloxi Lighthouse
This post may contain affiliate links or mention our own products, please check out our disclosure policy here. 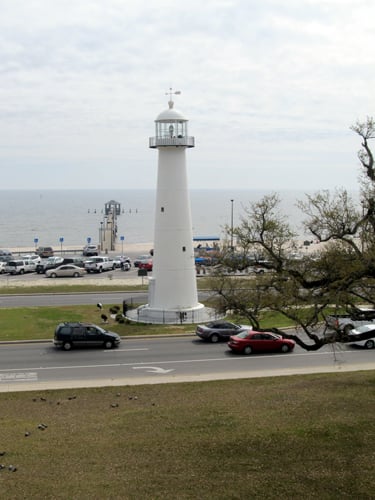 You wouldn’t expect that an ordinary-looking lighthouse would be listed in “Ripley’s Believe It or Not,” but the 64-foot tall Biloxi Lighthouse made their 2002 edition. It’s claim to fame? It is the only lighthouse standing in the median of a four-lane highway! So even if you’re just driving along the Mississippi Gulf Coast, it’s easy to get a good look at this famous icon from your RV. But if you’d like to learn more, or want to climb to the top to see its fifth order Fresnal lens (tours offered Monday-Saturday, weather permitting), the plantation-style Biloxi Visitor Center is literally across the street. Not only does the 24,000 square-foot center provide a great place to park and take photos, it is packed with information, a museum, and a theater.

As you might expect, the beacon was not always landlocked. When first put into service in 1848, the cast iron Biloxi Lighthouse stood on a low sandy bluff just 29 feet from the shoreline; its white light was visible as far as 13 nautical miles out to sea. It was only after the completion of the public beach in the early 1950s, that the lighthouse became surrounded by pavement instead of sand. The Biloxi Lighthouse also bears the unique distinction of having been tended by female keepers for more years than any other lighthouse in the United States. Three different women held the job between 1854 and 1929. The light was automated in 1938, and the last keeper retired the following year. It was decommissioned by the Coast Guard in 1967 and has belonged to the city of Biloxi for the last 45 years.

As a result of damage inflicted by Hurricane Katrina, the lighthouse was closed for over a year. But in early 2010, following a $421,000 restoration, the city landmark that once guided antebellum steamships, lumber barges, oyster schooners, and shrimp trawlers, was once again beaming brightly as a navigation aid to modern-day commercial ships and pleasure craft.

The Biloxi Lighthouse sits in the middle of U.S. 90 at Porter Avenue, just a quarter mile west of the intersection of U.S. 90 and Interstate 110. The Biloxi Visitors Center is across the street from the lighthouse at 1050 Beach Blvd. Visitors Center website: http://www.biloxi.ms.us/museums/Visitors_Center/index.html