You are here: Home / Blog / Great Escapes: Calico Ghost Town Regional Park
This post may contain affiliate links or mention our own products, please check out our disclosure policy here. 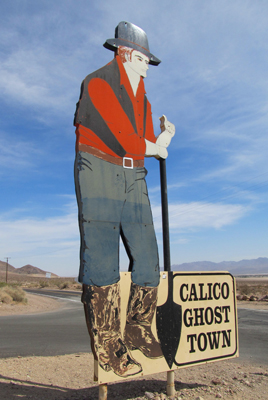 Like many mining boomtowns gone bust, Calico, California quickly sprang to life in 1881 when silver was first discovered, and met its demise when silver lost its value about 15 years later. Calico is anything but a ghost town today. Thousands visit every year to wander through the western-themed town, tour an underground mine, ride the narrow-gauge train, pan for gold, and attend special events. Gunfighters are known to appear from time to time, and RV camping is available if you want to stay a while.

In its heyday, about 30 miles of tunnels honeycombed the Calico Mountains. Mines, in and around Calico, including the famous Silver King Mine that started the silver strike, produced silver ore worth millions and millions of dollars. But around 1896, down on their luck miners began loading their mules and moving on. An attempt to revive the town was made around 1915 when a cyanide plant was built to recover silver from the unprocessed Silver King Mine’s deposits, but Calico largely remained a ghost town.

In 1951, Walter Knott, founder of the Knott’s Berry Farm amusement park, purchased Calico. Referencing old photographs, Knott restored many of the original buildings to look as they did in the 1880s. Other structures have since been added or replicated, all with a rustic weathered look that creates a picturesque little town. Mr. Knott donated Calico to San Bernardino County in the late 1960s, and it was designated a California Historical Landmark.

Many of the early silver mines still exist in the hills around Calico, but signs warning of the dangers of entering abandoned mines tell visitors to keep out. The Maggie Mine is the exception. Located right in town, this self-guided underground tour is a safe and fun way to learn about hard rock mining and see pieces of old equipment. Combine this tour with a short ride on the historic Calico & Odessa Railroad. 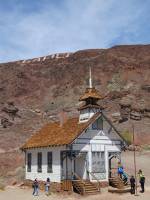 Calico Ghost Town Regional Park is located off Interstate 15, about a two-hour drive in either direction to Los Angeles or Las Vegas. Although the roads are paved, the desert scenery is sparse, giving it an appropriate “out in the middle of nowhere” feel. But when you see the giant letters spelling CALICO on the mountain peaks behind the ghost town, there will be no doubt that you’ve found it!