You are here: Home / Blog / Great Escapes: Chimney Rock
This post may contain affiliate links or mention our own products, please check out our disclosure policy here. 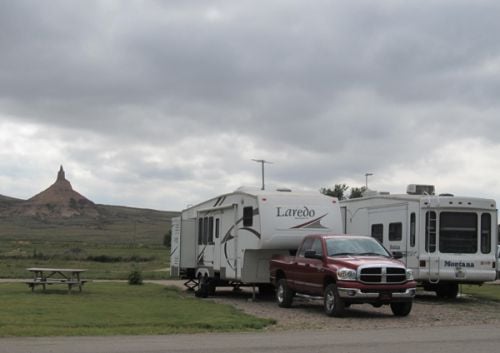 Chimney Rock is the most frequently mentioned landmark in diaries of Oregon Trail pioneers. At approximately 325 feet from tip to base and 120 feet for the spire, this formation would have been visible to wagon trains for several days before they reached it. Most of the overland travelers were flatlanders, so it was unlike anything they had ever seen. If you, too, want to be impressed, stop at the Ethel & Christopher J. Abbott Visitor Center near Bayard, Nebraska for great views of the rock, and to learn about the greatest voluntary westbound migration. The displays at the center include a dress from 1849, a doll, tools, and many other relics carried by the pioneers. Be sure to also watch the video presentation for a great historic overview. 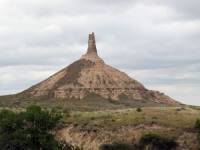 Chimney Rock was designated a National Historic Site in 1956. And did you know that this famous natural landmark was originally called “elk penis” by Native Americans? According to fur traders, that name made more sense to the Plains Indians than a white man’s chimney. However, the inoffensive word “chimney” won out in the long run. Another tidbit of trivia is that this monolith is not actually a rock. It is composed of sandy Brule clay with horizontal layers of volcanic ash and sandstone. Soft clay easily erodes, but hard sandstone does not. Like many other geological formations along the North Platte Valley, natural forces of deposition and erosion by wind and water formed Chimney Rock. Pioneers used to climb it to carve their names in the soft Brule Clay.  A  rock in the visitor center has an original carving from the 1850s. The center also has a gift shop, but perhaps the best souvenir would already be found in your pocket— a Nebraska state quarter. It features a covered wagon headed west past Chimney Rock.

For an even closer view of Chimney Rock, take a short side road that is located very near the visitor center. There’s a cemetery at the end of that road, and the setting provides a great photo opportunity.