You are here: Home / Blog / Great Escapes: Columbia Gorge Interpretive Center Museum
This post may contain affiliate links or mention our own products, please check out our disclosure policy here. 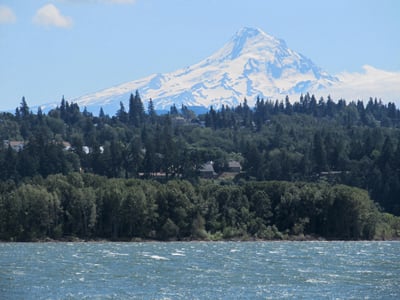 Traveling through the Columbia River Gorge on the Washington side is a scenic journey onto itself. But the route becomes even more meaningful and interesting when you know some of the area’s history and highlights. The best place to get that knowledge is at the Columbia Gorge Interpretive Center in Stevenson, Washington. In fact, 15,000 years of history is showcased by the museum’s varied exhibits and artifacts.

Much of the first floor of the museum is devoted to the early culture of the Cascade Chinook Indians and the inevitable impact white settlers had on the culture of the first peoples. The museum shows this best through a dramatic diorama of an Indian dip netting for fish at a waterfall, as compared to the mechanical fishwheel that was abundant on the banks of the Columbia River beginning around 1882.

An exhibit on Lewis and Clark’s Corp of Discovery in 1805 and 1806 tells the story of early trade and commerce with the Indians. The Doumitt Storefront depicts a typical dry goods store as it existed in Stevenson in 1907.  In the early 1850s, three forts or blockhouses were located nearby, as evidenced by the military artifacts on display. The histories of the Spokane, Portland & Seattle Railroad, the development of Highway 8 and the era of the sternwheeler are also interpreted in the museum galleries. A massive Corliss steam engine and Mack log truck from the 1920s takes up a large portion of floor space, and suspended from the ceiling is a 1917 Curtiss JN-4 or “Jenny” bi-plane, typical of the first airplanes that delivered air mail in the Gorge. 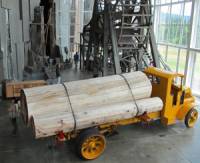 To learn about the geological creation of the Gorge, catch the 12-minute program in the main theatre on the mezzanine level. Displays about botany and entomology further tell the natural history of the area, including the carvings of fish, birds and mammals first identified by the Corp of Discovery. 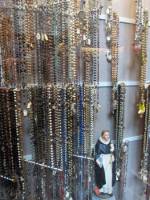 The second floor of the museum interprets the stories of immigrants who shaped the Columbia River Gorge. You’ll see a wide variety of family portraits and old household items. Two unique and unusual “spiritual” exhibits are also upstairs, one featuring 4,000 strings of rosary beads, and the second is about the now defunct scientific philosophical organization called The Lightbearers, first organized by Baron Fersen who left Russia just before the Bolsheviks took over. 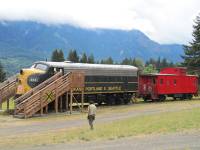