You are here: Home / Blog / Great Escapes: Fort Morgan — Guardian of Mobile Bay
This post may contain affiliate links or mention our own products, please check out our disclosure policy here. 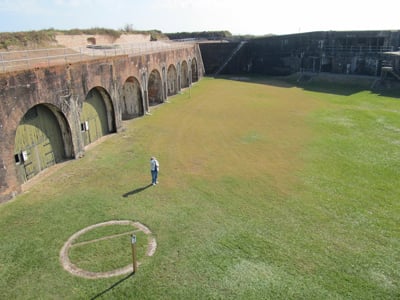 At dawn on August 5, 1864, an 18-ship Union fleet commanded by Admiral D. G. Farragut steamed toward Fort Morgan and the entrance to Mobile Bay. The Confederate defenders of the fort opened fire, but could not stop the invaders. Although the Union Tecumseh struck a mine (known as a torpedo during the Civil War) and sank immediately, it was that exact disastrous incident that caused Admiral Farragut to give his famous order, “Damn the torpedoes, full speed ahead…” The remaining vessels then successfully sailed past the fort, through the minefield, and into Mobile Bay. Today, you can take a self-guided tour of Fort Morgan National Historic Landmark without fear of conflict. 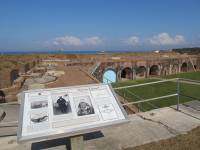 The cannons and ordnance are long gone, but nearly 200 years of military history remain in the form of more than 40 million bricks, concrete, casemates, batteries, bastions, gun mounts, and powder magazines. Before you explore the fort, visit the museum first for an overview, and to see actual items recovered from the site. A rare Fresnel lens from the Middle Bay Lighthouse is also on display. And you’ll find a gift shop complete with souvenirs, books, and toys. If you’d like to see the fort come to life, each August re-enactors in Civil War uniforms commemorate the battle of Mobile Bay and siege of Fort Morgan with artillery firing, infantry sharp shooting and other presentations. Special events are also held Memorial Day, July 4th, and at Christmas time. 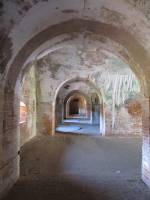 Built between 1819 and 1823, Fort Morgan was improved upon over the years. The relative ease at which Farragut was able to gain access to Mobile Bay with the loss of only one ship, was yet another indication that by the mid 1860s Fort Morgan was out of date. Rifled cannon and steam-powered warships repeatedly defeated the old brick fort before and during the Civil War. It took until the 1890s, however, that major improvements were implemented. Concrete batteries were built between 1895 and 1905, and were manned during the Spanish-American War and World Wars I and II. The military base was greatly expanded between 1898 and 1910, and at its peak had almost 100 structures. In 1946, the fort was deactivated and turned over to the State of Alabama. 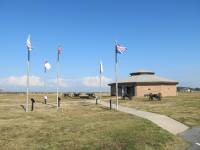 Directions to Fort Morgan from the city of Mobile, Alabama:

Arrive at the center of FORT MORGAN, AL