You are here: Home / Blog / Great Escapes: Fort Rock State Natural Area
This post may contain affiliate links or mention our own products, please check out our disclosure policy here. 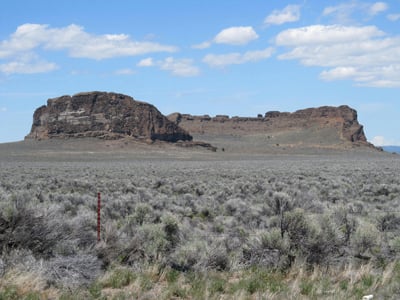 It’s hard to imagine that the dry and dusty desert landscape at Fort Rock State Natural Area was actually covered by a lake. Geologists believe that about 10,000 years ago, during a period of intense volcanic activity in central Oregon, Fort Rock was created when molten lava rose from deep within the earth and came into contact with the water-saturated rocks beneath the lake. The resulting steam produced volcanic explosions, which hurled huge rock fragments into the air. This falling debris formed 500-foot high jagged walls called a “tuff ring” and gave Fort Rock its name. Over the centuries, the lake’s wind-battered waves eroded the walls down to around 200 feet high, creating its crescent shape. Fort Rock is about one-third of a mile in diameter, and is easily explored from the designated hiking trail. Interpretive signs and maps in the picnic area near the parking lot point the way. Watch for golden eagles, white-throated swifts, and prairie falcons soaring overhead, and for lizards scampering across the trail.

As you walk around inside, imagine the early American Indians who canoed to and from Fort Rock. Sandals found in nearby Fort Rock Cave are the oldest ever discovered, dating back around 9,000-13,000 years. In addition to sandals made of sagebrush, woven baskets and mats have been found in several other caves in the Fort Rock basin, along with arrowheads, spear points, and charcoal from fire pits. Fort Rock Cave is located on private property, not marked on public maps or websites, but guided cave tours can be arranged by calling Oregon State Parks at 800-551-6949. 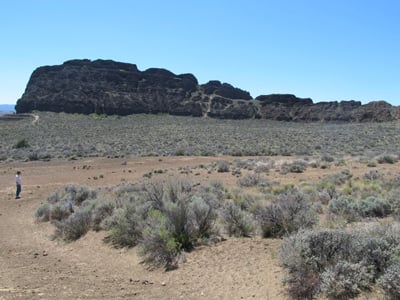 Just south of Fort Rock is Homestead Village, an open-air museum that interprets much more modern history— that of the homestead era, which peaked in 1912. Fort Rock Homestead Village was opened in 1988 to preserve and protect homestead-era structures by moving them from their original locations to the museum site. Many were scheduled for demolition before being rescued by the Fort Rock Valley Historical Society. Wander through the Village where you’ll find several homes, a church, a school, a doctor’s office, and many pieces of vintage equipment. On display inside the small reception center is exhibits on barb wire and weaving. 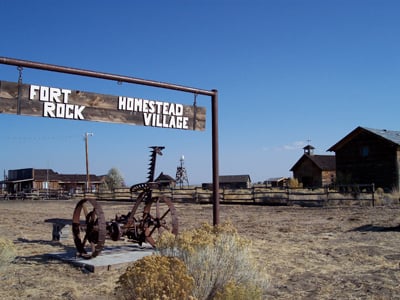 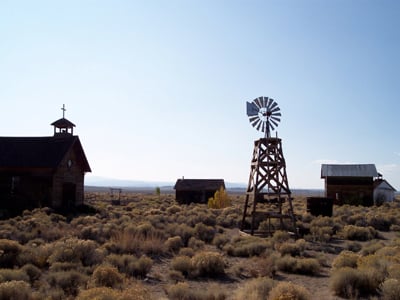