You are here: Home / Blog / Great Escapes: Garden of the Gods
This post may contain affiliate links or mention our own products, please check out our disclosure policy here. 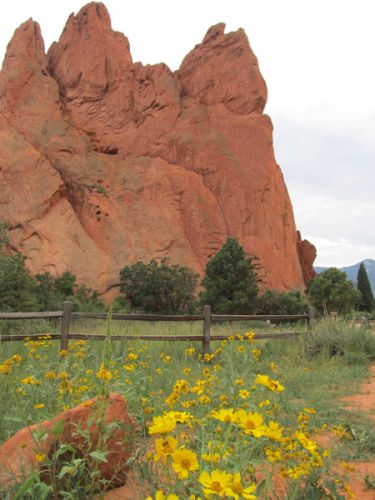 Formerly a camping place for the Ute Indians for thousands of years, Garden of the Gods park in Colorado Springs is now a mecca for photographers, hikers, rock climbers, wildlife watchers, and anyone fascinated by unusual geology. The amazing red sandstone formations are as interesting as their names— Kissing Camels, Three Graces, Cathedral Spires, Balanced Rock, and many, many more. The 1,319-acre free park is laced with inter-connecting trails, or you can drive through and admire the towering shapes from the road. There’s also a free Visitor & Nature Center filled with interactive exhibits on the area’s geology, ecology, and cultural history. Pikes Peak can be seen from the Center’s balcony, and those views alone make it worth a stop. As the sunlight changes throughout the day, so do the colors and shadows on the sandstone, so it’s never the same view twice. Early morning and late afternoon are generally best for photos. 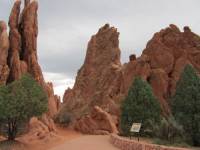 The area first got its heavenly name in 1859 from two surveyors looking for the perfect place for a townsite at the base of Pike’s Peak (that town eventually became Colorado Springs). Malancthon Beach commented to his friend that the beautiful spot would be “a great place for a beer garden someday.” Rufous Cable replied that it was a place “fit for the Gods” and the name stuck. Over a century and an half later, visitors still agree with Mr. Cable!

Even before Garden of the Gods became a city park in 1909, and then a National Natural Landmark in 1971, it had been free to the public. Charles Elliott Perkins, the head of the Burlington Railroad, bought 240 acres here in 1879 to build a summer home. He later added to the property but never built on it, preferring to leave his wonderland in its natural state for the enjoyment of the public. Perkins died in 1907, and two years later his children conveyed their father’s 480 acres to the City of Colorado Springs with the stipulation that it “would be known forever as the Garden of the Gods and remain free to the public, where no intoxicating liquors shall be manufactured, sold, or dispensed, where no building or structure shall be erected except those necessary to properly care for, protect, and maintain the area as a public park.”