You are here: Home / Blog / Great Escapes: General Patton Memorial Museum
This post may contain affiliate links or mention our own products, please check out our disclosure policy here. 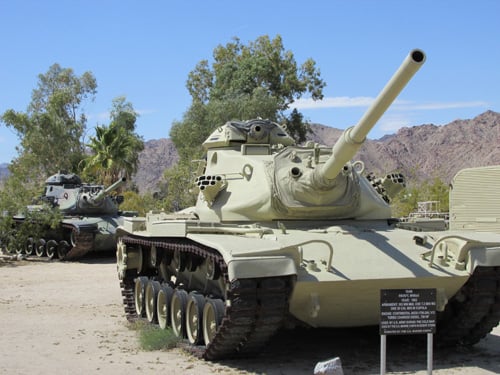 If you plan to compete in a marathon, you train for it in the same conditions you’ll face on race day. If you’re preparing for war, you do the same thing— mimic the hot, dry, barren battle conditions your soldiers will likely encounter. In early 1942, General George S. Patton did just that by choosing 18,000 square miles of harsh southern California desert to train his troops for fighting in northern Africa. Although those 11 Desert Training Centers were closed on April 30, 1944, Chiriaco Summit is now home to the General Patton Memorial Museum.

The museum’s collection includes military exhibits from World War I through the present— vehicles, uniforms, firearms, ammunition, and thousands of photos and stories. Outdoors you’ll find a large fenced tank yard with vehicles ranging from World War II through the Vietnam War. The majority of the artifacts inside the museum have been donated by veterans or by the families of veterans. Interesting personal effects you’ll see include canteens, clothing, cigarettes, and canned water and food. There is also a unique display of “trench art.” Soldiers sometimes spent long hours waiting in trenches and passed the time between artillery barrages by sculpting shell casings into detailed works of art. They are unexpectedly beautiful. 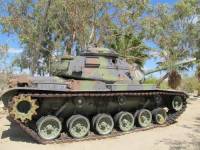 The centerpiece of the museum is aptly named “The Big Map,” an immense five-ton jigsaw relief map created in the 1920’s by the Los Angeles Department of Water and Power (a.k.a., Metro Water Department or MWD). It covers the area from north of what would become Lake Mead to the Mexico border, from deep inside Arizona to the Pacific at a scale of 5,000 feet to the inch. The MWD gave the map to General Patton because it nicely covered the entire area of his Desert Training Center. Patton then added his camps and airfields. In 1988, the MWD gave the map to the General Patton Memorial Museum, which is the same year it opened its doors. Since then, the museum’s goal has been “preserving the peace through the lessons of the past.”

The General Patton Memorial Museum is located 30 miles east of Indio on the I-10 Freeway. Exit at the Chiriaco Summit (exit 173).