You are here: Home / Blog / Great Escapes: Golden Spike National Historic Site
This post may contain affiliate links or mention our own products, please check out our disclosure policy here. 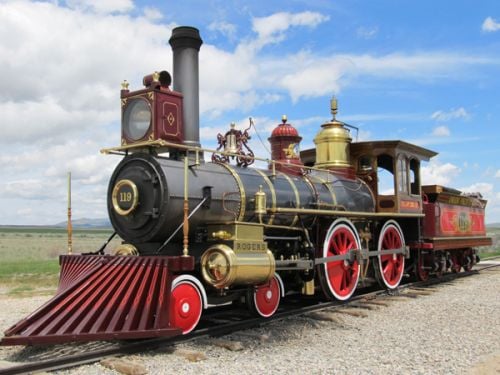 Golden Spike National Historic Site near Brigham City, Utah commemorates the day— May 10, 1869— that East met West in America thanks to 1,776 miles of train track. At this site you’ll learn the story behind the fierce competition between the Central Pacific (CP) that headed east from Sacramento, and the Union Pacific (UP) that headed west from Omaha. Replicas of the two colorful and ornate steam locomotives that met at Promontory Summit— the Jupiter and the 119— still blow off a little steam each day in the summer as they reenact this significant day in American history. During the winter, you can see these locomotives up close in the nearby engine house. 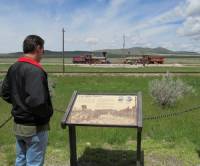 The movie and exhibits inside and outside of the Golden Spike Visitor Center do a great job explaining the events that led to the completion of the nation’s first transcontinental railroad. You may really start to feel a little sorry for Leland Stanford’s CP that had a much tougher job than Thomas Durant’s UP. Not only did the Central Pacific have to blast 15 tunnels through the granite Sierra Nevada Mountains, it first had to ship everything 15,000 miles around Cape Horn. The Union Pacific had easier terrain across the plains, but faced Indian raids. Men on both teams, mostly immigrants, worked harder and faster than anyone could have imagined. The most experienced tracklayers could lay two pairs of 30-foot, 560-pound rails a minute, and spikers drove 10 spikes per rail, three blows per spike! Before track could be laid, though, surveyors and graders had to first do their jobs, followed by thousands of workers who blasted tunnels and built high wooden trestles in preparation for the track. 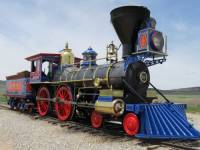 When the two railway lines finally met at Promontory Summit on May 10, 1869, a huge celebration ensued. The Last Spike ceremony took place with a symbolic tap of a 17-carat gold spike, followed by the pounding of the real final iron spike. Not only was this achievement an engineering marvel, but the railroad also opened up the West to settlement, agriculture, industry, trade, and travel.