You are here: Home / Blog / Great Escapes: Idaho’s Mammoth Cave and Shoshone Bird Museum of Natural History
This post may contain affiliate links or mention our own products, please check out our disclosure policy here. 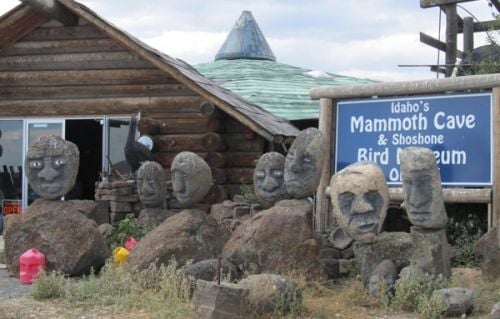 What does a lava tube, taxidermy birds, fossils, and mining artifacts have in common? All these eclectic items are found at Idaho’s Mammoth Cave and Shoshone Bird Museum of Natural History. Located eight miles north of Shoshone, Idaho, it’s worth a stop if for no other reason than to take a cave tour, and scratch your head while puzzling at thousands of oddball items collected by three generations of the Olsen family. Even the giant stone faces at the entrance are a mystery. Oh yeah, and you’ll find emus and peacocks strutting around the property as well! 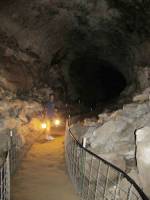 Idaho’s Mammoth Cave was found in 1954 by high school senior Richard Olsen and his girlfriend. They weren’t the first to explore the cave, though. The signatures of early settlers from 1902 were discovered on the cave walls. Richard raised mushrooms in the cave for several years, then he opened it to the public. Mammoth Cave also was used as a fallout shelter in the 1960s, and until the 1980s, the government stored enough extra food and water here for 8,000 people. Today, visitors are provided with a propane lantern to supply both light and heat while on a self-guided tour. Expect a quarter-mile hike in, and the same route back out (the rest of the cave has yet to be explored). The underground temperature is a constant 41 degrees year-round, so bring a jacket. 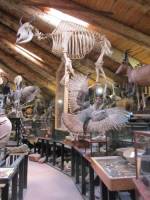 The round building that houses the Shoshone Bird Museum of Natural History is as unique as the collection inside. The walls are built of natural uncut lava rock, four feet thick. Thousands of unusual, rare, and dusty items hang from the ceiling and walls, and others are under glass. There doesn’t seem to be a rhyme or reason to the objects— a life-size stuffed giraffe, beaded Indian leatherwork, ancient pottery, animal skeletons, and old cook stoves rub shoulders here. There is so much to see, you don’t know where to look next! Some things are a bit creepy; all are oddly fascinating.

Part geologic wonder and part kitschy attraction, Idaho’s Mammoth Cave and Shoshone Bird Museum of Natural History is an out of the ordinary place literally out in the middle of nowhere. This roadside stop sure won’t make any Top 10 Destination List, but sometimes it’s just these curious venues that make the best travel stories. Watch out for those peacocks! 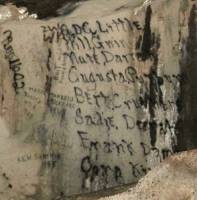 Adults $10; ages 7-16 $5 and children 6 and under FREE. Large gravel parking lot can accommodate RVs of all sizes.