You are here: Home / Blog / Great Escapes: Mesa Verde National Park
This post may contain affiliate links or mention our own products, please check out our disclosure policy here.

Established by congress in 1906, Mesa Verde (Spanish for “green table”) is the first national park set aside to preserve the works of humankind. Here in the high plateau country of Southwestern Colorado, visitors can view centuries of Ancestral Puebloan history from scenic pullouts along the road, or by guided tours of the ruins. To best plan your time, first stop at the Far View Visitor Center (15 miles from the entrance) for information and a map. The Chapin Mesa Archeological Museum (20 miles from the entrance) also provides an excellent overview of the history and culture of Mesa Verde National Park.

The Ancestral Puebloans (formerly called Anasazi Indians) inhabited the region for more than 700 years— from about 550 A.D. to 1300 A.D. Although the park is known for its fabulous cliff dwellings, the ancient people actually lived on top of the mesas for the first six centuries of their existence. The early “basketmakers” (so named because of their great skill in this area) first built and lived in simple pithouses—shallow pits dug in the ground and covered with pole and mud roofs. Later, their homes became a bit more sophisticated and began appearing above ground and included upright walls of poles and mud. 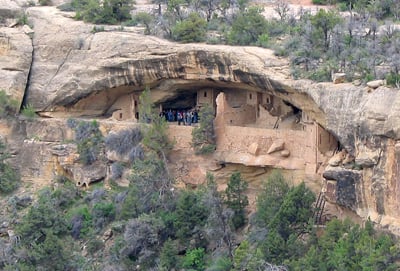 As with other nearby Ancestral Puebloan communities of the same period, Mesa Verde was deserted by about A.D. 1300. During the Ancestral Puebloans’ final 75 to 100 years here, they constructed and lived in cliff dwellings. Taking advantage of the natural landscape, the ancient people built their communities beneath overhanging cliffs and farmed on top of the mesas. They reached their elevated fields by using hand and toe hold “ladders” carved into the rock. The intricate cliff dwellings we see today are two and three stories high and made of stone. Hundreds of inter-connecting rooms and kivas, some with plastered and painted interiors, are fascinating to see up close. 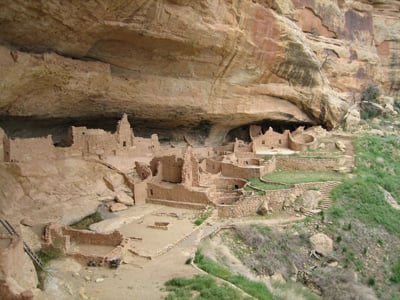 To better explore the ruins, take a ranger-guided tour of either Cliff Palace (the largest cliff dwelling in the park), Balcony House, Spruce Tree House, or Long House. If climbing ladders and trekking up and down uneven trails (required for some ruins tours and to see petroglyphs) isn’t your idea of fun, though, not to worry. Most cliff dwellings and mesa-top sites are visible right from the park’s roads. Just consult your park map and drive to the designated overlooks and wayside exhibits. Park Point, the highest elevation in the park (8,427 feet), has a 360-degree panoramic view that is considered one of the grandest in the country. 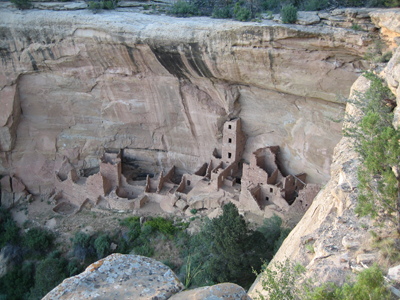 Pueblo descendants (modern Southwest Indians) feel that the spirits of their ancestors still inhabit the area, and that the ruins are sacred and special places to honor their ancestors. Keep this in mind when exploring, and treat all sites with respect and reverence. They are fragile and irreplaceable and represent a significant part of America’s cultural heritage.

Entrance is $10.00 per vehicle. Camping at Morefield Campground starts at $24 plus $2 energy surcharge, plus tax for a dry campsite. Full hookups also available. Camping and other lodging info here.

Pets are NOT allowed in archaeological sites or on any of the park trails. They are allowed in parking lots and in the campground only and must be on a leash.

Directions: The entrance to the park is 9 miles east of Cortez and 35 miles west of Durango in Southwestern Colorado on US Highway 160.