You are here: Home / Blog / Great Escapes: Minute Man National Historical Park
This post may contain affiliate links or mention our own products, please check out our disclosure policy here. 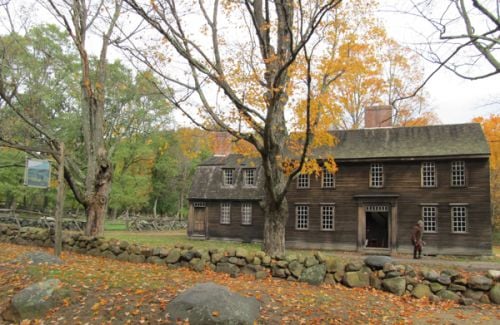 The first battle of the American Revolution began at dawn on April 19, 1775, with a one-sided British victory in Lexington, Massachusetts. Eight militiamen were killed and 10 wounded. It ended that evening with the British Regulars fighting for their lives on the road to Boston against nearly 4,000 Colonial militiamen.  Minute Man National Historical Park commemorates this opening battle, and encompasses many points of interest within the towns of Lexington, Lincoln and Concord.

If you’re a little rusty on your American history or just want to pick up a park map, begin your visit at the Minute Man Visitor Center near the eastern entrance of the park. In addition to the exhibits, an excellent multimedia program is shown. In the theater, you’ll get a refresher course on Paul Revere’s Ride and the battles at Lexington Green, North Bridge and along the Battle Road. After leaving the visitor center, explore the Battle Road Trail. This five-mile trail connects historic sites from Meriam’s Corner in Concord to the eastern boundary of the park in Lexington. You can hike as much as you want, or drive to key points such as Paul Revere’s Capture Site and the Hartwell Tavern Historical Area. The authentic historic home of Ephraim and Elizabeth Hartwell and their children is in great shape for being well over 200 years old, and is definitely worth a stop. 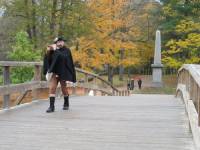 Concord’s North Bridge is the site of “the shot heard ‘round the world” and features the famous Minute Man statue by Daniel Chester French. Costumed interpreters are known to appear with their musical instruments, especially when a school group is visiting. The North Bridge Visitor Center is also here, and features a short video about the North Bridge clash and houses one of the best exhibits in the park— the Hancock brass cannon. “The Hancock” as it’s known was originally in Boston but was stolen from the British by Colonials, then smuggled out of the city and hidden in Concord. Once in Concord, this cannon and others was added to a growing colonial arsenal. Retrieving the stolen “Hancock” was actually one of General Gage’s chief motives when he sent British troops to Concord on April 19, 1775.

To really get into the spirit or the Revolution, but only if you don’t mind crowds, consider visiting Minute Man National Historical Park on Patriot’s Day. This official state holiday is celebrated annually in mid-April with parades and reenactments. This year, it is observed on Monday, April 21, 2014, but commemorative ceremonies run the entire weekend.

Minute Man National Historical Park is located 22 miles outside of Boston within the towns of Lexington, Lincoln and Concord, Massachusetts. The grounds are open daily sunrise to sunset April – December. Parking lot gates close promptly at sunset. Ranger programs are offered between Memorial Day weekend and the end of October.