You are here: Home / Blog / Great Escapes: Oregon Ferries
This post may contain affiliate links or mention our own products, please check out our disclosure policy here. 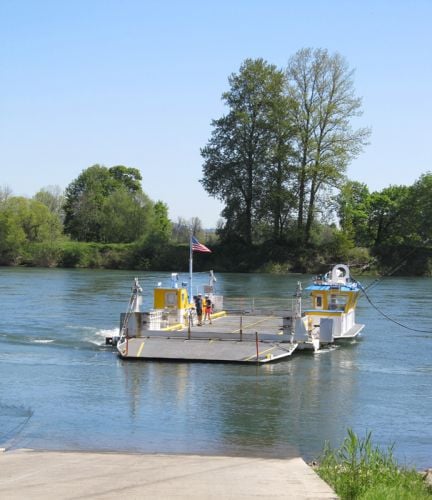 Ferries have been spanning Oregon’s waterways since the 1820s. Mostly used for transporting livestock and agricultural goods, plus a few people and their possessions, in the early days the ferries were real necessities. However, with the creation of the interstate highway system following World War II, automobile drivers demanded more and better roads. Accordingly, local, state, and federal governments constructed just that— along with lots of bridges. Ferries then began to fall by the wayside. But there are still three ferries operating in the Beaver State and all of them are in or near small towns located in the Willamette Valley—Canby, Independence, and Wheatland. For just a couple of dollars, it’s fun to take a short scenic trip across the Willamette River.

Oregon’s oldest continually operated ferry is the Wheatland. It connects Willamette Mission State Park on the east to Maud Williamson State Park on the west bank. Since the nearest bridge is 15 miles away, the Wheatland Ferry remains a vital access point for locals, farmers, truckers, and tourists alike who need to cross the 580-foot wide Willamette River here every day. The first Wheatland ferry was built in the mid-1840s, was big enough for a one horse-drawn wagon, and was powered by a rope and a mule!  Today, the ferry has two electric motors and is guided by steel cables. The Daniel Matheny V (named for the first operator) can accommodate nine vehicles (not more than 22 feet long), plus 50 people and their bicycles.

The Canby ferry has been in operation since 1914, except from 1946 to 1953. It has room for six vehicles (or 75 tons) and a total passenger capacity of 49. The M.J. Lee II is named after Millard Jerome Lee, the first child born in Canby in 1872, two years after the town was platted. It runs every day and the trip takes about three minutes. The Buena Vista ferry, located a few miles south of Independence is also a cable ferry powered by electricity. The river is approximately 720 feet wide at this crossing. In 2011, this boat was replaced with a new one paid for in part by federal stimulus funds. The new vessel allows year-round, daily operation; formerly it only ran from April to October.

In days of yore, almost every pioneer community in the Willamette Valley was tied to the rest of the territory by a ferry. Although roads and bridges have replaced our reliance on ferries, it’s still fun to hitch a short ride and experience a bit of old-fashioned leisurely river travel. All aboard!

For maps, operating hours and a list of tolls, visit
http://www.co.marion.or.us/PW/ferries/