You are here: Home / Blog / Great Escapes: Paulina Peak Observation Site
This post may contain affiliate links or mention our own products, please check out our disclosure policy here. 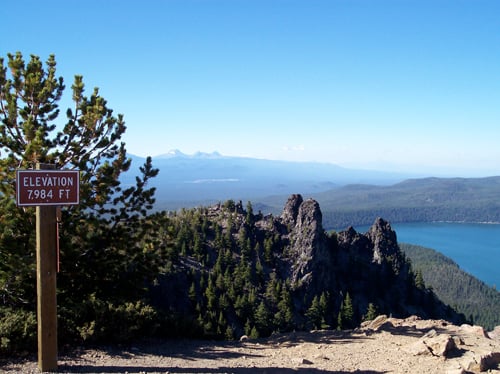 There aren’t too many places perched at 8,000 feet above sea level that you can drive up to for a look down into the caldera of a volcano, and a look out at snowy mountain peaks. But at the summit of Paulina Peak in central Oregon, you can do just that. Not only will you get a bird’s eye view of Newberry Volcano, but also of the two lakes, cinder cones, and huge obsidian flow within its caldera. Paulina Peak is part of the Newberry National Volcanic Monument, named for John Strong Newberry, who explored Oregon in the 1850s.

The four by five-mile Newberry Caldera formed about 75,000 years ago. Over the millennia, several caldera-forming collapse events have taken place, so what you see today came about gradually through massive eruptions that spewed pumice and ash. Before the formation of the caldera, it is thought that Paulina Peak was 500 to 1,000 feet higher than it is presently. As you take in the views, you’ll notice that this is a land of scenic contrasts— barren areas created by ancient lava flows, thick forests, and trout-filled Paulina and East Lakes. Both caldera lakes are great for fishing and boating, and also have hot springs. In 1987, temperatures higher than 500 degrees Fahrenheit at a depth of approximately 3,000 feet were found in a U.S. Geological Survey drill hole in the center of the caldera. These temperature measurements indicate that an active magma system still lies beneath Newberry Volcano.

The obsidian stream that once flowed out of the south wall of the caldera is known as the Big Obsidian Flow. It is the youngest lava flow known to exist in Oregon and is also one of the most interesting. About 1,300 years ago, more than a square mile of natural black glass poured into the caldera. For a closer look at this moon-like landscape, take the one-mile interpretive trail that climbs up and onto this impressive lava flow. Interpretive signs along the trail point out the geology, biology, history, and archaeology of the flow. Wear sturdy, closed-toe shoes here (no flip flops); the black obsidian is so sharp that Native Americans used it for arrowheads and cutting tools. There is no shade on this hike, so be sure to bring water in the summer as the temperature can get pretty high in the middle of all the black volcanic glass. The trail is not suitable for dog paws or small children.

From Bend, Oregon, travel 24 miles south on Hwy 97, then 13 miles east on County Road 21, and then 4 miles south on Forest Road 2100 500 to the summit. Parking fee is $5 per vehicle from May 1 through September 30 if you don’t have a Northwest Forest Pass. The road up to Paulina Peak is usually closed due to snow at other times of the year. Road to the summit is gravel, but graded. Not suitable for long trailers or large motor coaches