You are here: Home / Blog / Great Escapes: Riding the Rails of the White Pass Yukon Route
This post may contain affiliate links or mention our own products, please check out our disclosure policy here.

Give me enough dynamite and snoose and I’ll build a railroad to Hell, bragged Michael Heney one spring evening in 1898. He was talking to some railway surveyors and investors at the St. James Hotel in Skagway, Alaska. Looking for his next challenge, Heney, an experienced railroad contractor, was determined to forge a route to carry gold prospectors and their equipment from Skagway to the Yukon Territory. The famous Klondike Gold Rush was in progress, and a rail route could replace the months of hiking and hauling supplies the gold stampeders had to endure. It was a solid idea, but who could have known that the Gold Rush would be over by the time the narrow gauge railroad could be of much use to miners. Alaska cruise ships now bring far more tourist business to the historic White Pass Yukon Route (WPYR) than the original gold rush ever did, but that’s OK because a ride today on The Scenic Railway of the World is unforgettable! 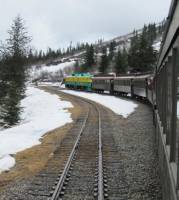 The WPYR climbs nearly 3,000 feet to White Pass Summit in just 20 miles, and every mile is more scenic than the next. Rushing waterfalls, deep gorges, tunnels through solid granite, cliff hugging turns, and high bridges flanked by forest and snowy mountains guarantee a grand adventure and great photos. Watch for black bears and white mountain goats! The three-hour White Pass Summit Excursion (the most popular trip, but you can go farther) is fully narrated. You can also follow the route map located in the free All Aboard! magazine that shows points of interest and their mile markers.

As you pass particular sections of the route, you’ll hear interesting, and often sad stories. For example, Black Cross Rock at milepost 10.4 marks the spot of a blasting accident that buried two railroad workers under a 100-ton granite rock. This is their final resting place. Dead Horse Gulch at milepost 17.5 was aptly named because during the 1897-1898 winter, 3,000 pack animals died here – most were literally worked to death by gold fever crazed miners who had no regard for the animals in their haste to get to the gold fields still nearly 600 miles away. 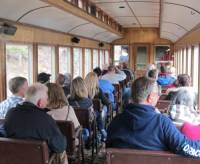 The restored and replica passenger coaches, each named after lakes and rivers in Alaska, Yukon and British Columbia, are warm and comfortable. If you can, sit on the left side of the train when heading up to White Pass. Going up takes a little longer than coming down, and the best scenery is on the left. Don’t worry, though, because it’s mandatory that passengers switch sides of the train for the return trip so that everyone gets a great view out the huge windows. And you can always step outside to take photos from the vestibule as well, but if the wind is brisk, you might not want to stay out there for too long! Watch for the Steel Bridge at mile 18.6. Constructed in 1901, this was the tallest cantilever bridge in the world at the time and was used until 1969.

Thanks to the muscle power of 35,000 railway workers, 450 tons of blasting powder, and a pinch of snuff between the cheek and gum (the snoose favored by Michael Heney), the WPYR was completed in just two years, two months, and two days. Begun on May 28, 1898, it was constructed against all odds, and now covers about 112 miles from Skagway, Alaska to Whitehorse, Yukon. Originally built for $10 million to carry gold miners into the Klondike, the WPYR is now an International Historic Civil Engineering Landmark, the same honor shared with the Eiffel Tower and Statue of Liberty. All aboard! 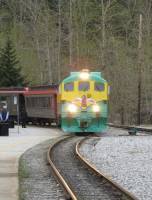