You are here: Home / Blog / Great Escapes: Scout’s Rest
This post may contain affiliate links or mention our own products, please check out our disclosure policy here. 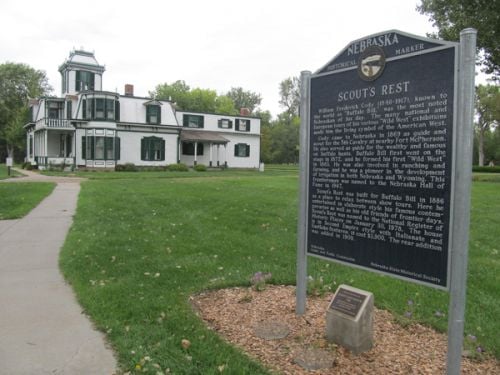 When you think of an old-fashioned Wild West Show from the 1880s, you can’t help but picture a handsome white-haired gentleman with a white handlebar mustache and goatee astride a horse. This showman, William Frederick  “Buffalo Bill” Cody, entertained crowds across America and Europe for almost 30 years. His circus-like attraction also featured sharp shooter Annie Oakley, Sitting Bull, and hundreds of costumed performers who reenacted Indian attacks on wagon trains, stagecoach robberies, the Pony Express, and more. In between tours, Bill retreated to Scout’s Rest, his lavish ranch in North Platte, Nebraska. The house, barn, a sod-roof cabin, and grounds are open to the public and give a good glimpse into the life of this soldier, scout, showman, and buffalo hunter. 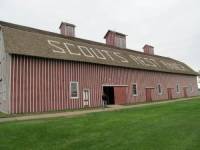 Built in 1886 at a cost of $3,900 (with carpeting and fine furnishings it topped $6,000), the two-story home features numerous closets and pantries and a 10-foot wide porch— all features that were not common in most homes of the period. It’s easy to see, as you stroll through the rooms, that no expense was spared. After all, Bill and his wife Louisa often entertained royalty, celebrities, and many wealthy friends, and Bill planned to retire here. Most everything is original— the framework, trim, wallpaper, kitchenware, even photographs on the wall and personal items in the bedrooms and baths. It almost feels like the Cody family still lives here, but since 1965, the ranch has been a state historical park.

Upstairs at Scout’s Ranch, you’ll find display cases containing a wealth of memorabilia from Buffalo Bill’s Army career and the Wild West Show. You’ll also learn how he got his name (Cody is purported to have killed 4,280 bison in 18 months when he had a contract to supply Kansas Pacific Railroad workers with buffalo meat.) There are many other interesting tidbits of trivia, too, such as the nickname of his famous rifle— Lucretia Borgia (which probably came from a Victor Hugo play). Cody’s rifle was a Springfield Model 66, caliber 50/70/450. The 50 stands for 50 caliber, 70 stands for 70 grains of black powder, and the 450 stands for 4590 grain lead bullet. A few purses and toiletries belonging to Mrs. Cody are also displayed. 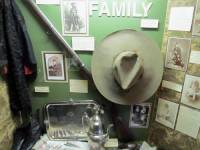 Scout’s Rest was originally about 4,000 acres here, but today the state historical park encompasses just 25 acres. . The grounds are nicely landscaped with a small stream and footbridge. There are even a few bison on the property. The huge barn is also quite a showpiece. Annie Oakley’s trademark Ace of Hearts with a bullet hole in the middle is at the peak of the roof. Take a walk through the 148 feet long barn and notice the faded Wild West Show posters and black and white photos on the walls— it’s almost like a mini museum. Leather tack still hangs on pegs near the horse stalls as if Buffalo Bill might saddle up at any time.

Called “Pahaska” (meaning  long hair) by the Lakota Indians, Buffalo Bill Cody died at age 71 in 1917, and is buried in Lookout Mountain Park outside of Denver, Colorado. He had made quite a fortune at the height of his Wild West Show career, but unfortunately died without much of it left to pass on to his wife Louise, daughter Irma, and foster son Johnny Baker. 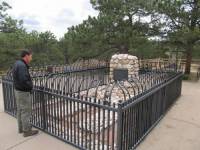