You are here: Home / Blog / Great Escapes: Sea Lion Caves
This post may contain affiliate links or mention our own products, please check out our disclosure policy here. 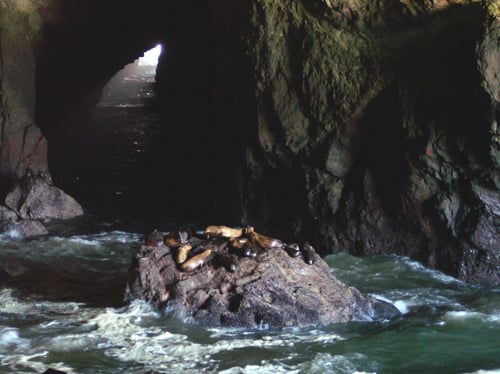 Raucous, odiferous and cavernous come to mind when describing Sea Lion Caves on the Oregon Coast. So does impressive, unique, and historic. Put all those adjectives together and you get a dictionary worth of imagery that sums up a visit to one of the largest sea caves in the world. Not only is it the year-round home to roaring Steller Sea Lions, but some species of sea birds are also protected here.

Stellar sea lions gather here in this natural amphitheater during fall and winter. In spring and summer, they breed and have their young on rock ledges just outside the cave. Steller sea lions are the largest of the eared seal family and are considered non-migratory, so you’re sure to get a good look at a few no matter when you visit. When resting on rocks in the cave, they are hard to miss. The males can weigh more than 2,000 pounds and are eight to eleven feet long. Their roar is almost as immense as their girth!

Although their numbers vary from season to season and from year to year, the herd at Sea Lion Caves averages about 200 animals. And this is one of the only places where their population is actually increasing. This particular sea lion is named after George Wilhelm Steller, a German naturalist who was the first qualified observer to study and classify these huge animals.

A local seaman named William Cox first discovered this basalt sea cave in 1880, but it wasn’t until 1932 that it became a business and open to the public. Before the elevator was completed in 1961, guests had to trek up and down a steep quarter mile trail and traverse 250 stairs. For the last 50 years, though, a specially-designed elevator makes it easier to descend and ascend 208 feet into the cave. Although visiting is much less strenuous now, there is still about 400 yards of uphill and downhill walking at a grade that ranges from 10% to 20%, plus 37 steps.

Sea Lion Caves is a famous Oregon Coast attraction that has welcomed thousands of annual visitors over the past 80 years. The next time you’re driving this stretch of Highway 101 near Florence, consider a stop to see a cave that’s the length of a football field, over 25 million years old, nearly 12 stories high, and home to some of the loudest pinnipeds on earth!

Sea Lion Caves is just 11 miles north of Florence, Oregon and 38 miles south of Newport. Adult admission $14, Seniors $13, and Children 6-12 $8. Children 5 and under are free. There is plenty of FREE RV Parking.