You are here: Home / Blog / Great Escapes: Take a Tour of Old Ironsides When Visiting Boston
This post may contain affiliate links or mention our own products, please check out our disclosure policy here. 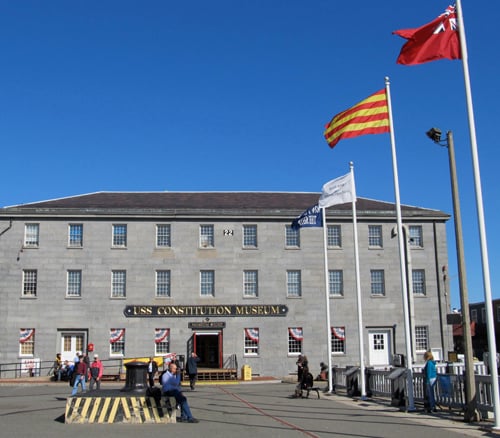 The years 2012 through 2015 mark the bicentennial of the “Second War of Independence” between England and America, and also commemorate a historic 200 years of peace between the United States, Great Britain, and Canada. So now is the perfect time to tour one of the great surviving warships from that period— the USS Constitution, better known as “Old Ironsides.” The frigate is berthed at the former Charlestown Navy Yard, at one end of Boston’s Freedom Trail. Half-hour guided tours are conducted by active-duty Navy Sailors who take you through the ship’s spar deck (top deck), gun deck and berth deck and explain the history of the ship, its crew, and more. The first-come, first-serve tours are free, but require everyone 18 years and older to first pass through a security inspection and show photo identification (driver’s license or passport). Before or after the ship tour, also spend some time in the USS Constitution Museum. 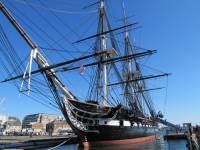 The USS Constitution, a wooden-hulled, three-masted heavy frigate, was constructed between 1795 and 1797 in Boston, and named by President George Washington. Overall she measures 207 feet— the world’s oldest commissioned naval vessel still afloat. It is estimated that the ship you see today contains 10-15 percent of its original wood, but all the guns are replicas. During the War of 1812, thirty 24-pounder long guns were mounted on the gun deck and twenty-four 32-pounder carronades (short large-caliber cannon) were on the spar deck.  The long guns weighed 5,554 pounds exclusive of the carriage and required a crew of 14 men to operate them. The carronades weighed 2,222 pounds without the carriage and needed a four to eight men. 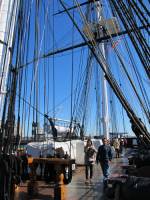 The Constitution was originally built to provide protection for American merchant shipping during the Quasi-War with France, and to defeat the Barbary pirates. She was quite successful at her mission, but didn’t become famous until she captured numerous merchant ships and defeated five British warships, especially the Guerriere on August 19, 1812. Following the victory, both the press and the ship’s officers used the name “Old Ironsides” in print, and the name stuck.

Also located at the naval yard is the USS Constitution Museum. With nearly 1,700 artifacts and over 7,000 rare books, manuscripts, and other archival material, whatever you want to know about the War of 1812 or Old Ironsides and her crew can be found here. Interactive exhibits make learning fun for kids of all ages. 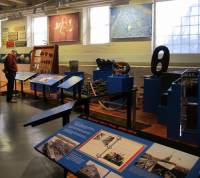 Visitors wishing to only enter the ship’s yard and/or visitor center, but not embark the ship, do not require an approved ID, but are still subject to a visual inspection of all bags.