You are here: Home / Blog / Great Escapes: The Dalton Gang Hideout
This post may contain affiliate links or mention our own products, please check out our disclosure policy here. 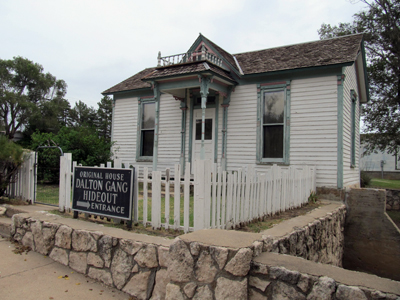 From working as U.S. Deputy Marshals to stealing horses and robbing trains and banks, the notorious Dalton Gang had quite an ironic résumé.  How do three brothers—Robert, Gratton and Emmett Dalton— turn from lawmen to outlaws? If you’d like to learn more about the Dalton family (there were 15 children in all) and see the brother’s secret escape tunnel, stop at the Dalton Gang Hideout in Meade, Kansas. You can also tour a museum and the home of Eva Dalton-Whipple, sister to the Dalton boys. The escape tunnel led from her home to the barn where the get-away horses were always waiting. 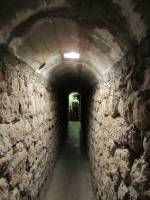 The Dalton’s legendary criminal career lasted less than two years but covered parts of the Oklahoma territory, Arkansas, California, and Kansas. Their first robbery took place in February of 1891, and their last attempt was in October 1892. Robert (Bob) was the leader of the Dalton Gang. He turned to a life of crime when he was 21. He supposedly handed in his Deputy Marshal badge because he was owed a large amount of back pay but never received it. Gratton (Grat) had also served as a U.S. Deputy Marshal, but was wounded in the line of duty. After that, odd jobs didn’t hold much appeal for him. Grat supposedly drank heavily and had a mean temper. Emmett was the youngest and started out as a horse thief when he was just 19 years old.

Over confidence and greed got the better of the boys on October 5, 1892 when they attempted to hold up two banks at the same time in Coffeyville, Kansas.  Bob and Grat, were killed during the attempted robbery. Emmett was badly injured from gunshot, but lived to serve almost 15 years in the Kansas State Prison before being pardoned. Upon his release, Emmett moved to California, eventually got married, and wrote two books about his outlaw days. He also assisted in the production of several films that were made about the Daltons. He died in 1937.

Eva Dalton-Whipple’s guilt or innocence in connection with her brother’s activities was in question, so Eva and her husband John quietly slipped out of town in late 1892. It was the new owners of the Whipple’s abandoned home, Horace and Louella Marshall, who discovered the tunnel that had allowed Bob, Grat, and Emmett to come and go undetected. The Whipple home, built in 1887, has been restored and still contains some original furnishings. The museum in the barn loft contains Dalton family history and photos, and many relics from the late 1800s.