You are here: Home / Blog / Great Escapes: The Mammoth Site
This post may contain affiliate links or mention our own products, please check out our disclosure policy here. 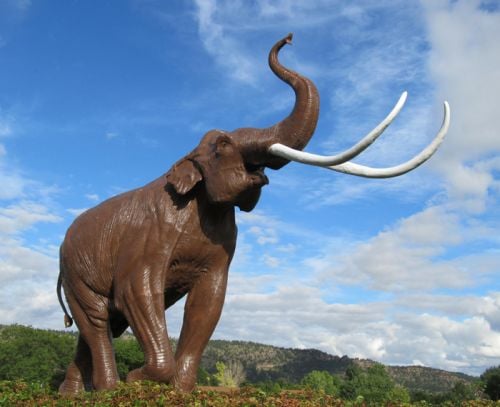 Imagine owning a large tract of land, and while excavating it for a housing development, your earth moving equipment digs up fossils of prehistoric beasts. Not just one bone or tooth here and there, but the remains of lots of Columbian and woolly mammoths! This is exactly what happened in 1974 on the southwest edge of Hot Springs, South Dakota. Luckily, no homes were ever built and the Mammoth Site was preserved. Now enclosed and protected by a climate-controlled building, the sinkhole and the in-situ exhibit of mammoth bones can be enjoyed during a 30-minute guided tour. No glass walls here— you’re literally just a few feet away from Ice Age fossils! 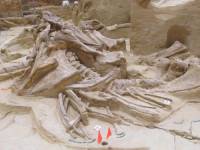 The bones and tusks are displayed as they were discovered. Walkways along the now dry pond provide a close-up view of the fossils and excavation tools. Tour guides point out the most interesting specimens and explain why and how the fossils came to be. More than 26,000 years ago, large mammoths and other animals were trapped and died here after coming to the pond to eat, drink, and bathe. Unable to scale the steep shale banks out of the water, the mammoths ultimately died of starvation, exhaustion, or drowning. Over the millennium, the sinkhole slowly filled with layers of mud, entombing the animal remains and eventually fossilizing them. As of July 2013, 61 Mammoths (58 Columbian Mammoths and three woolly mammoths) have been identified, along with the remains of a giant short-faced bear, camel, llama, prairie dog, wolf, fish, and numerous invertebrates.

After the formal tour, you can go back and stroll the walkways of the dig area at your own pace and take more photos if you wish. You’ll also want to leave enough time to explore the many life size and awe-inspiring dioramas in the Ice Age Exhibit Hall, peek in the windows of the site’s working paleontology laboratory, and visit the gift shop. 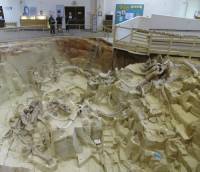 The Mammoth Site is the world’s largest Columbian mammoth exhibit, and a world-renown research center for Pleistocene studies. Because of the vast quantity and excellent condition of the fossils, it has achieved accreditation from the American Alliance of Museums, the highest national recognition for a museum. Of the estimated 17,500 museums in the USA, less than six percent of them have achieved this distinguished honor, so you know the Mammoth Site is definitely worth a stop!