You are here: Home / Blog / Great Escapes: Western America Railroad Museum
This post may contain affiliate links or mention our own products, please check out our disclosure policy here.

The official mission of the Western America Railroad Museum (WARM) in Barstow, California is to collect, preserve and share the history of railroading in the Pacific Southwest. Indoor displays include railroad artifacts, artwork, timetables, uniforms, tools, and a gift shop. Locomotives and general railroad operating equipment are outdoors. For those who love railroads and railroading, this small museum goes the extra mile it also gives you a chance to drive a train, and discover the fascinating history and hobby of railroad date nails. 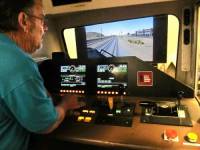 Bob Clayton, a museum volunteer and retired railroad man, is the go-to guy if you want to see what it’s like to be a locomotive engineer. The simulator is a relatively new addition to the WARM and a fun way to get a “feel” for how an engineer accelerates a train, applies brakes, and makes adjustments for grades and signals. The simulator graphics are amazingly life-like, and who 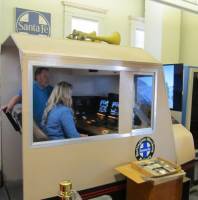 doesn’t like to blow the train whistle?! As Mr. Clayton shows you how to operate the simulator, he’ll also share his own interesting real-life stories. After a 43-year career with the Atchinson, Topeka, and Santa Fe Railway Company (now BNSF), there’s probably no question Bob cannot answer. You can literally talk to him for hours!

The museum is also home to Albert Gustafson’s incredible collection of railroad date nails and pole nails.  With more than 12,000 nails under glass, it is the largest variety on display in the world. Around 1900, date nails were used by the railroads, and a few utility companies, to determine the best wood and chemicals for cross ties and poles. The date was either indented or raised, some were copper and some were galvanized steel, some were 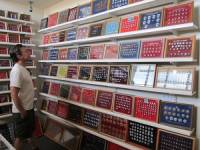 square and some were round. The nails served their purpose well and after tabulating and learning from all the collected data, the railroads have discontinued their use. Mr. Gustafson began collecting in 1969 and personally hunted and pulled over 70% of the nails in his collection. Not only will you find nails from all 50 states, but also from Germany, Switzerland, France, England, Canada, Peru, Mexico, and other countries. Talk about unique railroad memorabilia! 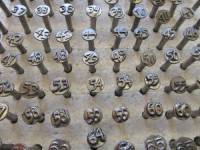 The location of the Western America Railroad Museum is a treasure itself – inside an historic Harvey House. During the heyday of rail passenger service in the Western United States, Barstow boasted a splendid rail depot/restaurant/hotel complex called the “Casa del Desierto” or House of the Desert. Completed in 1911, the Casa del Desierto was operated by the Fred Harvey Company. These Harvey Houses provided gourmet dining and luxurious hotel rooms to travelers, and earned a reputation for friendliness and hospitality. The train yard outside is still in use, and the building is also used by Greyhound and Amtrak stations, several arts groups, and the Mother Road Route 66 Museum. Lots to see and do here!

* From Interstate 15/40:  Take Barstow Road north (toward Main Street). At Main Street turn left (west), go three blocks, then right (north) on 1st Avenue. Cross the first bridge over the BNSF rail yards until you get to the Harvey House entrance on your right.